Pike is Kentucky's easternmost county, it is also the state's largest county in terms of land area. Pike County is the 11th largest county in Kentucky in terms of population preceded by Bullitt County and followed by Christian County. Pike County is Kentucky's third largest banking center, with financial institutions and holding companies having more than $1 billion in assets.[4] In the five years spanning 1995-2000, personal income increased by 28%, and the county's per capita income exceeded the national and state average growth rates of the past decade.[5] Pike County is the seventy-first Kentucky county in order of creation.

With regard to the sale of alcohol, it is classified as a moist county—a county in which alcohol sales are prohibited (a dry county), but containing a "wet" city, in this case two cities: Pikeville and Coal Run Village, where package alcohol sales are allowed.[6]

Pike County was founded on December 19, 1821. The county was named for General Zebulon Pike, the explorer who discovered Pikes Peak.[7] Between 1860 and 1891 the Hatfield-McCoy feud raged in Pike and in bordering Mingo County, West Virginia. On May 6, 1893, Pikeville officially became a city and the county seat.

The Appalachian News Express, published in Pikeville, is preserved on microfilm by the University of Kentucky Libraries. The microfilm holdings are listed in a master negative database on the UK Libraries Preservation and Digital Programs website.[8]

The main population areas of the county include the city of Pikeville and surrounding suburbs and the unincorporated town of South Williamson which is located in the northeast portion of the county. 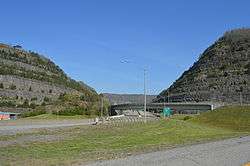 U.S. Route 23 passes through the Pikeville Cut-Through, the second largest earthmoving project in the Western Hemisphere.

The largest self-reported ancestry groups in Pike County, Kentucky are:[17]

Pike was historically a solidly Democratic county until 2004. However, since 2004 it has shifted dramatically towards the Republican party. 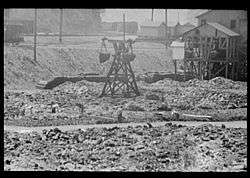 A coal breaker in Pike County in 1938 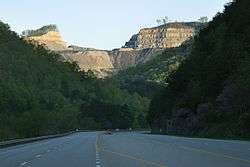 Pike County has vast fossil fuel, (coal and natural gas) reserves. Pike County is one of the nation's leading coal and natural gas producers. In April 2007, Pike County announced the first-in-the-nation comprehensive energy strategy which was developed in partnership with the Southern States Energy Board in Atlanta, Georgia, whose Executive Director is Ken Nemeth.[20]

Pike County is the second-largest coal producing county as reported in 2013 next to Union County in the western part of the state. Adding that to the counties of Harlan County, Perry County, and Martin County, Eastern Kentucky produces nearly  3⁄4 of all coal produced in the entire state.[21] Over 150 million tons are produced annually throughout the state.[22]

The economic status of Eastern Kentucky and Appalachia has come to be a prominent discussion in the news. The poverty level of counties in the Appalachian region of Kentucky is 24.4% compared to the United States Poverty Level of 12.4%.[23] Of the top eight coal-producing counties in eastern Kentucky, Pike County is the only county that does not have a higher poverty rate than Appalachian Kentucky as a whole. 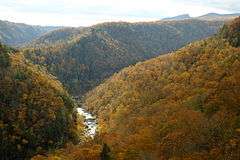 Tourism is also a major source of economic growth in Pike County. In 2012, nearly 300,000 people visited the Breaks Interstate Park on the Kentucky-Virginia border.[30]

Over 1,400 businesses contribute to the growing economy in Pikeville. Local city government is rapidly working to promote business development by attracting and supporting new businesses, as well as existing businesses. From 2005-2011, downtown Pikeville has seen major growth. The Eastern Kentucky Exposition Center was constructed in 2005 and seats 7,000.[31] It features numerous events including world-renowned concerts and shows. The county is also home to the Pikeville Concert Association which secures renowned cultural events for the area. These events usually take place at Booth Auditorium on the campus of the University of Pikeville.

The Pikeville Medical Center received a $44 million loan from the U.S. Department of Agriculture Rural Development program in 2010 to construct an eleven-story office building and adjacent parking garage in downtown. Construction was completed in 2014.[32]

In the summer of 2011, Jenny Wiley Theatre group announced their collaboration with the city of Pikeville to construct a 200-seat indoor professional theater in downtown Pikeville. The theatre opened in May 2014.[34]

The office of Pike County Judge Executive is one of Kentucky's most powerful local offices and served as a launching pad for the governorship of Paul E. Patton (1995–2003).[35] 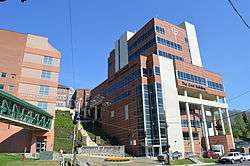 The following lists of middle and elementary schools is categorized by the high school they feed:

Pike County has had several minor league teams based out of Pikeville . From 1982-83, the Pikeville Cubs were located in the city. They were part of the Appalachian League and affiliated with the Chicago Cubs. In 1984, the team changed to become affiliated with the Milwaukee Brewers, thus changing its name to the Pikeville Brewers. In 2010 Pikeville Independent's baseball team finished in the final four at the KHSAA Baseball State Tournament. In 2012 and in 2013 Pikeville Junior High baseball finished runner up in the Kentucky Middle School State Tournament both years.

In 2007, the East Kentucky Miners came to Pike County after the opening of the Eastern Kentucky Exposition Center. the team played in Pikeville from 2007-2010. In 2010, the American Basketball Association opened an expansion franchise in Pikeville called the East Kentucky Energy. In 2011, UPike Men's Basketball won the National Championship defeating Mountain State University.

In 2010 the Pike County Crusaders, an Indoor Arena Football team, was announced as coming to the Eastern Kentucky Expo Center, but the initiative soon failed. In 2011, The East Kentucky Drillers, an Indoor Arena Football franchise came to the Eastern Kentucky Expo Center in Pikeville. In 2012, the team changed its name to the Kentucky Drillers. In 2015, Pikeville Independent won the Class 1A State title.