Owsley County is a county located in the Eastern Coalfield region of the U.S. state of Kentucky. As of the 2010 census, the population was 4,755,[1] making it the second-least populous county in Kentucky. The county seat is Booneville.[2] The county was organized on January 23, 1843 from Clay, Estill, and Breathitt counties and named for William Owsley (1782–1862), the judge of the Kentucky Court of Appeals and Governor of Kentucky (1844–48).[3]

According to the 2010 census reports, Owsley County has the second highest level of child poverty of any county in the United States.[4] In terms of income per household, the county is the poorest in the nation.[5]

The first settlers in Owsley County were John Renty Baker and John Abner. They settled there in about 1780 near the present Clay County line at Courtland. A gravestone in a cemetery on Upper Buffalo Creek reads, "Milly, wife of John Abner, died March 1846."

John Renty Baker and his sons, all of them gunsmiths, invented and developed hand-operated machines to rifle the barrels. John Renty Baker's father, Robert Baker, is sometimes credited with developing the firearm known as the "Kentucky Rifle".

John Renty Baker was one of the "Longhunters", spending more than a year at a time in the hunting and trapping in the forests of Kentucky and Tennessee. According to "The Conquest of the Old Southwest", Baker hunted in Kentucky in 1766 with Daniel Boone's brother-in-law, John Stewart. He lived on the Green River among the Cherokees and made trips down the Cumberland River to Spanish Natchez to sell furs.

After the death of his wife, Baker became a recluse and lived in a rock house (rockshelter) near the mouth of Buffalo Creek, where he died in 1820. He was the father of at least 21 children, who are documented.

The Baker family is the source of many stories. They were involved in one of the longest and bloodiest family feuds in U.S. history, which began in 1843 when Dr. Thomas Baker (a grandson of Julius Bob Baker) shot John Bales. Dr. Baker and Bales hsd both married to daughters of John White, and the couples became more intimate than was usual in the mountain country. Dr. Baker was insanely jealous of his wife and Bales. In a fit of rage, he abandoned his wife and filed for divorce, although he later withdrew it. Baker and Bales worked at a salt works in Manchester, and one day Baker called Bales to the door and shot him with his pepper box pistol. As he lay dying, Bales cursed Baker and ordered $10,000 from his estate to be used for to capture and convict him. The family feud lasted for 59 years and eventually cost more than 100 lives.

The first settler of Booneville was James Moore, Sr. His home was just outside of Booneville, in front of today's Booneville Homes apartments. Moore's son, James Jr. built a two-room cabin across the river from his parents. This cabin still exists, though it has been enlarged and remodeled through the years. It is currently owned by Booneville's mayor, Charles Long.

James Moores' land included all of Booneville, extending east across the South Fork River and towards Lerose. The community was originally known as Moore's Station, but it was renamed Booneville (for Daniel Boone) when it was incorporated in 1846. James Moore Jr. was the first postmaster. When the county was formed in 1843, Elias Moore donated the land for its seat. The post office opened in 1844. Owsley County lost part of its territory to Jackson County in 1858, and two years later lost more to Wolfe County. In 1870, Lee County was formed, and Owsley County was reduced to its present size.

The first permanent settlers of Owsley County were the Moore, Bowman, Baker, Gabbard, and Reynolds families. Most land patents came from Virginia, which Kentucky was once a part of. These were issued for military service, settlement or preemption, and for warrants from the treasury. Some families even today live on their original land grants.

Although 97% of communities within the U.S. allow the legal sale of alcohol, until a 2013 election, Owsley County was dry. This included the City of Booneville, the county seat. County voters had repeatedly rejected the repeal of alcohol prohibition laws enacted in 1920. This ended on March 6, 2013, when a majority of county voters voted to designate the county "wet". The vote was 632 "wet", 518 "dry". This permitted the sale of alcohol once the fiscal court had set ordinances to regulate the distribution of alcoholic beverages.[7] Even though the sale of alcohol had long been forbidden, its consumption has been legal since 1933, when the Twenty-first Amendment was implemented.

As was typcail, drunk driving during Owsley's time as a dry county was more of a problem than than in wet counties, due to the necessity of driving long distances necessary to buy legally-sold alcohol. A study in Kentucky suggested that residents of dry counties have to drive farther from their homes to consume alcohol, which resulted in increased impaired driving.[8]

Since the recent construction of a golf course located on Kentucky Route 11, this portion of Kentucky law may be relevant: According to Kentucky Revised Statutes (KRS) 242.123, an individual precinct within any dry territory—which can be a dry county, or a dry portion of an otherwise wet county—that contains a USGA-regulation golf course may vote to allow the sale of alcoholic beverages, by the drink on that specific course. As of the last officially published update on Kentucky wet and dry counties by the Kentucky Office of Alcoholic Beverage Control (ABC) in October 2011, 24 golf courses in 15 different counties were approved for such sales at the local level, with two awaiting state approval.

The county is located in the Eastern Mountain Coal Fields which is a part of the Appalachian Plateau (more precisely, the Cumberland Plateau). The elevation of the highest summit in the county appears to be between 1730' +/- 10' due to the 20' closed contour interval according to this map:.[10] It is located on the county's extreme southern boundary with Clay County. The lowest elevation (650' +/- 10') appears to be at the point where the South Fork crosses the Owsley/Lee border on the north side of the county.[10]

There were 1,894 households out of which 32.6% had children under the age of 18 living with them, 54.8% were married couples living together, 12.7% had a female householder with no husband present, and 26.7% were non-families. 24.5% of all households were made up of individuals and 10.7% had someone living alone who was 65 years of age or older. The average household size was 2.51 and the average family size was 2.98.

Though deep mines in thin coal seams once provided jobs and income for local residents, this is not the case in present-day Owsley County. There are some surface coal mining sites in the county—one notable strip mine is visible from the road and presently operating 3 miles north of Booneville on Kentucky Route 11.

Gas and oil wells are particularly dense on the north side of the county, though few are in operation.

Timber is an integral part of the local economy. There is a sawmill located in the Lerose community on Kentucky Route 30 East. Several log-yards are visible where timber is staged for further processing.

The Abraham Lincoln Relief Sculpture, locally known as 'Abe Lincoln Rock' or 'Abraham Lincoln Rock', is located just off Highway 846 in the Conkling community of Owsley County.[20][21] The sculpture is listed in the inventory of folk art in the Smithsonian American Art Museum.[22]

The sculpture was carved by a traveling pack peddler, Granville Johnson, in the 1930s. Local Legend has it that Johnson had come to Owsley County ill and in need of assistance. The John Williams family cared for him on their farm located south of Booneville. As he began to recover his strength, Mr. Johnson would take a hammer and chisel and climb the hill behind the Williams' home each day. Once recovered well enough to travel again he revealed the sculpture, which he had created as a gift of appreciation to the family.[22]

The Owsley County Fiscal Court purchased the sculpture and surrounding land in 2008 from Clyde and Dianna Combs. There are no signs informing would-be visitors of its actual location; therefore, it's difficult to find for any potential tourists who wish to visit the site. 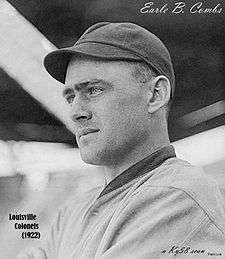 Earle Bryan Combs, born May 13, 1899 at Pebworth in Owsley County, played baseball for the New York Yankees from 1924 to 1935 and was inducted into the Baseball Hall of Fame in 1970. He was an ideal leadoff hitter for the legendary teams of the 1920s and 1930s. During this time, he played with Babe Ruth and Lou Gehrig. He averaged nearly 200 hits and 70 walks a season helping him compile a .325 career batting mark. He is featured in the National Baseball Hall of Fame. A plaque to honor his birthplace stands on Highway 11 in Pebworth.[23]

Combs left Owsley County to pursue an education in 1917 at the age of 18. After he left the county, he never returned for any considerable amount of time. Eventually in 1954, he settled in Richmond, KY after his extensive professional baseball career. 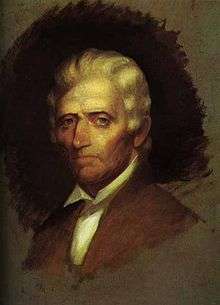 According to Joyce Wilson's book, A Romantic History of Owsley County, Daniel Boone made his way to Owsley County on a two-year hunt from 1769-1771. In 1784 he returned and surveyed some 50,000 acres for James Moore and Col. John Donelson. Boone used a huge rock at the mouth of Sexton's Creek, on which he carved his initials, as his starting point in these surveys. This rock, known as "Boone Rock" or "Goose Rock" is still there, located approximately nine miles south of Booneville on Highway 11 South. However, due to changes in the course of the stream throughout time, the initials are under water and cannot be seen, even during dry seasons.

Boone was impressed with this area and called it "a place where peace crowns the sylvan shade." He owned his own land of which a portion remained in the family until 1819, when Daniel Boone, Jr. transferred the last 1,000 acre tract on Meadow Creek to William Strong.

Daniel Boone's favorite camping spot, known as the "old encampment", is located a half a mile south of Booneville between the highway and the river just below the area known as the "Sag". In later life, Daniel Boone learned that many claims he had to land were invalid because someone else had made official claims before he did.

Daniel Boone's granddaughter, Leah Schull Newman, and other Boone descendants, are buried in the Newnam Cemetery located in the Pebworth area on Highway 11 North.