Not to be confused with the similarly-named city of Lakeside Park, Kentucky.

Lakeview Heights is a 6th-class city in Rowan County, Kentucky, in the United States. The population was 251 as of the year 2000 U.S. census.

The city was incorporated by the state legislature on November 20, 1979.[1] 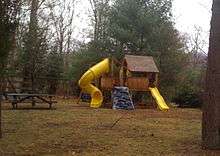 Lakeview Heights has a community center located in the Robert Stivers Community Building. This building may be rented out for community and group gatherings and also serves as the meeting place for the city government. The conference room is named in honor of former Lakeview Heights mayor Woodrow Barber.

Lakeview Heights has its own wooded municipal park.

There were 99 households out of which 34.3% had children under the age of 18 living with them, 72.7% were married couples living together, 11.1% had a female householder with no husband present, and 16.2% were non-families. 16.2% of all households were made up of individuals and 8.1% had someone living alone who was 65 years of age or older. The average household size was 2.52 and the average family size was 2.80.