Forsyth is a city in Taney County, Missouri, United States. The population was 2,255 at the 2010 census. It is the county seat of Taney County.[6] The town is part of the Branson, Missouri Micropolitan Statistical Area

From the beginning of the Civil War, Forsyth was seized and controlled by Confederate forces. The county courthouse was used as their headquarters and storage depot. On 22 July 1861, Brigadier General Sweeny and 1,200 Union troops with artillery converged upon Forsyth to expel the Rebels. Rebel forces withdrew from Forsyth but returned as soon as the Union troops departed. On 10 April 1862, Confederate forces once more were forced to flee Forsyth when Major General Curtis and his advanced guard from the Union Army arrived in town. Union forces occupied Forsyth for several days before moving on to Batesville, Arkansas, leaving Forsyth undamaged. Again, Rebel forces returned and set up their headquarters in Forsyth. Following the Battle of Prairie Grove, the Union Army moved back into Forsyth, where they remained for several months. Because of the threat of Rebel attacks, Union troops used logs from the town's dwelling to fortify their defenses. On 22 April 1863 Union forces left Forsyth, firing the town to ensure that their fortifications did not fall into Rebel hands. When the fires died out all that remained of Forsyth was the burned-out shell of the big brick courthouse. The courthouse was eventually rebuilt. Finally, on 19 December 1885, during the reign of the Bald Knobbers, the courthouse was totally destroyed along with all official records of the county and those of the only county newspaper. A new Taney County courthouse would not be constructed until 1890. 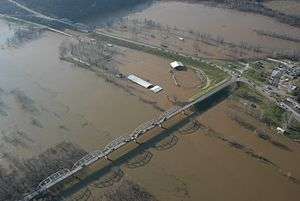 Shadowrock Park, formerly the location of the original town of Forsyth before it was moved to its current location. Photo taken during the flood of April 2008

The Court records show that on 15 December 1890 the Village of Forsyth was incorporated. The county court appointed the following persons to the city council in April 1891: J.C. Parrish, C.H. Groom, R.W. Cline, J.A. DeLong and J.M. Haworth. On 4 November 1891 the county court leased a room in the new courthouse to the first bank in Taney County, the new Taney County Bank, for the sum of $2.00 per month. Following the presidential election of 1896, William Jennings Bryan, accompanied by the governor and other important people of the time, ventured to Forsyth after Bryan's defeat by William McKinley. In 1898, the town well, located in the courtyard, was deepened and a windmill was ordered. In late June or early July 1912, the county court let bids for the construction of a new, modern county jail. The cost of the new two-story jail was $4,225.00 and was constructed of concrete and steel. The structure still stands to this day and is home to the White River Valley Historical Society. Around the middle of the century plans were being made in Washington that would bring great change to the little town of Forsyth. Plans were being made for the construction of a dam (Bull Shoals) on the White River, approximately 80 miles below Forsyth. Two choices were left for the town; the town could be kept intact and moved to a new location and be reimbursed for its property or it could do nothing and cease to exist. After some speculation and uncertainty a plan of action was initiated. The city limits of Forsyth were extended 2 miles west of the old town site (now called Shadow Rock Park) to an area that had once been a golf course. In the early 1950s the town of Forsyth was moved to this location.

There were 967 households of which 21.4% had children under the age of 18 living with them, 49.3% were married couples living together, 7.8% had a female householder with no husband present, 3.9% had a male householder with no wife present, and 39.0% were non-families. 34.7% of all households were made up of individuals and 22.1% had someone living alone who was 65 years of age or older. The average household size was 2.11 and the average family size was 2.68.

There were 788 households out of which 18.4% had children under the age of 18 living with them, 53.7% were married couples living together, 6.5% had a female householder with no husband present, and 38.1% were non-families. 34.8% of all households were made up of individuals and 20.6% had someone living alone who was 65 years of age or older. The average household size was 2.04 and the average family size was 2.59.