Poplar Bluff is a small city in Butler County in Southeast Missouri in the United States. It is the county seat of Butler County[6] and is known as "The Gateway to the Ozarks" among other names. The population was 17,023 at the 2010 census.

The Poplar Bluff Micropolitan Statistical Area consists of all of Butler County. The city is at the crossroads of U.S. Route 60 and U.S. Route 67.

Poplar Bluff takes its name from a bluff that overlooks Black River. When first settled, the bluff was covered with tulip poplar trees. The Butler County Courthouse and the offices of the city's Daily American Republic newspaper sit on this site. Poplar Bluff lies along an escarpment separating the Ozark Foothills from the Mississippi embayment in Southeast Missouri. The foothills lie to the north and west and the embayment is to the south and east. The surrounding area is commonly known as the "Three Rivers" with many local organizations and businesses using the name. The three rivers—Current River, Black River, and St. Francis River—are 40 miles apart with Poplar Bluff located in the center on the Black River.

The French were the first Europeans to assert any territorial rights over the Poplar Bluff area. The French held the area until 1770 when it was ceded by treaty to Spain. Spain held the area until 1802 when it was returned to France. During this time the area of Poplar Bluff, as well as all of Butler County, held almost no European settlements until 1819, when the first white settler family moved into the Poplar Bluff area. It was reported that about 300 Native Americans resided in the area at that time.

The earliest permanent settlements in what is now Butler County occurred in the early 19th century along the Natchitoches Trail, an old Native American Trail west of what is now Poplar Bluff on Ten Mile Creek and Cane Creek. Butler County was organized in 1849 and Poplar Bluff was chosen as the county seat. In 1855 the first courthouse was built and the town grew. On February 9, 1870, Poplar Bluff was incorporated. The Ward Plantation was established as the largest and longest slave plantation in the State of Missouri, founded by Ephraim Ward in 1829 and continued until the end of the civil war in 1865. After the Civil War, Rutherford Ward founded the 1st Bank of Missouri and converted the Ward Plantation into Ward Estate where they focused on farming. It was passed down to his son Wiley Ward who during a time of great prosperity bought most of the town and became its benefactor. After he died it was willed to his son, the industrialist farmer Dewey H. Ward, who in 1986 gifted the house and property to the state and town so it could be converted to a museum showcasing all major events in Poplar Bluff.[8]

In 1927 a tornado leveled most of the city, especially the original business district along Main and Broadway streets.[9]

There were 7,181 households of which 30.5% had children under the age of 18 living with them, 35.1% were married couples living together, 17.6% had a female householder with no husband present, 5.2% had a male householder with no wife present, and 42.2% were non-families. 36.1% of all households were made up of individuals and 15.4% had someone living alone who was 65 years of age or older. The average household size was 2.28 and the average family size was 2.94.

There were 7,870 households out of which 52.7% were married couples living together, 20.28% had a female householder with no husband present, and 39.3% were non-families. 34.9% of all households were made up of individuals and 17.0% had someone living alone who was 65 years of age or older. The average household size was 2.27 and the average family size was 2.9. 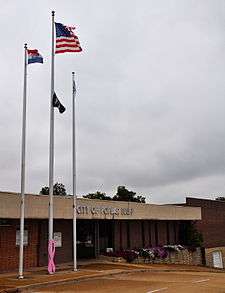 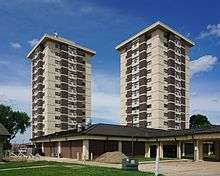 The Poplar Bluff R-1 School District serves the educational needs of most of the residents of Poplar Bluff and the surrounding area. There are seven elementary schools, one junior high and one senior high school in the school district.[16] During the 2008–2009 school year, there were 4,934 students and 374 certified staff members enrolled in the Poplar Bluff R-1 School District. The school colors are maroon and white and its mascot is the mule. Athletics offered in the school district include boys' and girls' basketball, soccer, track, cross country, and tennis; boys' baseball, golf, football, and wrestling; and girls' softball, volleyball, cheerleading, and swimming.

Three Rivers Community College is located in Poplar Bluff and provides college courses along with career and technical programs. Three Rivers offers the same freshman and sophomore level classes as many four-year public universities. The school colors are gold and black and its mascot is Rocky Raider. Three Rivers Basketball Coach Gene Bess has been recognized as the NJCAA "all time most winning Junior College coach".[17]