Trenton is a city in Grundy County, Missouri, United States. The population was 6,001 at the 2010 census. It is the county seat of Grundy County.[6] The city claims to be the world's largest producer of vienna sausages (at its biggest employer ConAgra Grocery Foods plant).[7]

Trenton was first settled in 1834 and was known as Lomax Store for the J.S. Lomax General Store on a bluff above the Thompson Branch of the Grand River (Missouri). It was renamed Bluff Grove and won a battle with Tindall, Missouri to become the county seat of Grundy County, Missouri. The hilly area today is called the "Green Hills." It was renamed again in 1842 in honor of Trenton, New Jersey.

The Chicago and Southwestern Railroad (which became part of the Rock Island Line) arrived in 1869. In 1890 Avalon College, which had been founded in Avalon, Missouri by the United Brethren in 1869 moved to Trenton because of proximity to the railroad. The College nearly closed again. 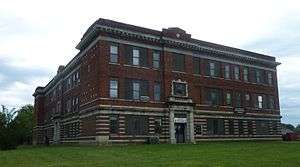 Former site of Trenton High School which is on the site of Ruskin College. The building is on the National Register of Historic Places

In 1900 George McAnelly Miller started to turn the school around. He was soon joined by Walter Vrooman who had just returned from Oxford, England where he established Ruskin Hall, a university called the "College for the People" based on the Utopian Socialist writings of John Ruskin. Avalon College was renamed Ruskin College after Vrooman donated 1,500 acres (6.1 km2) to it.

The college directly loaned money to the students and they could work at the school's canning, farming and novelty wood working businesses. The college admitted women (unlike the Oxford school).[8][9]

Vrooman then proceeded to attempt to buy the major businesses in the town buying three grocery stores, a hardware store, drug store—paying for it all in cash via the Western Cooperative Association. The New York Times on April 14, 1902 headlined its article on the development "Buying a Town Outright." According to the cooperative arrangement, members of the coop who spent at least $300 in one of its stores would receive a dividend at the end of the year.

The Ruskin experiment collapsed in 1903 when town residents resisted the Utopian business model and Vrooman's wife divorced him saying that he had squandered $250,000 of her money. Miller moved the college to the Chicago suburb of Glen Ellyn, Illinois in 1903 where it consolidated 12 different colleges and had an enrollment of 2,500 with 8,000 correspondence students. Friction quickly arose there also and the main school burned after being struck by lightning.[10]

In 1925, Trenton Junior College was established (which is now North Central Missouri College). Through expansion projects and support from numerous people, North Central Missouri College has developed into a major agricultural and nursing educational institution for the state of Missouri. Recent construction additions have added to the size of the main campus, and a current project will establish a satellite agricultural location directly south of Trenton.

In 1915, Arthur M. Hyde moved to Trenton and opened a law business and had the Buick dealership. Hyde would become Missouri Governor and then United States Secretary of Agriculture under Herbert Hoover. Hoover stayed at Hyde's home in 1933 visit following his Presidency. Arthur Hyde's widow built a home in memory of him in 1949. It is located in a residential neighborhood as a bed and breakfast under the name, Hyde Mansion.

In 1939 nationally famous track star Jesse Owens came to Trenton to run promotional races against a variety of opponents such as a man on a horse, a man in a truck, as well as anyone who wanted to run against the Olympic Gold Medalist. These were short races giving a decided advantage to the very quick Owens over horses or vehicles. Arriving in Trenton by bus Owens entered the bus station/diner known as the Blue Moon Cafe and noticed a tent sign reserving the center table. Trenton was located in an area that had historically not had slaves or free African-Americans but was segregated as the norm of the time. Owens asked the proprietor, Lee Hathaway, "where do colored folk eat?" Hathaway explained the reserved table was for him. Owens stated that he preferred to eat "where coloreds usually ate". He and Hathaway shared dinner in the kitchen. The next day Owens raced on the track that is still used by Trenton High School.

An early film maker was in town at the time making a promotional movie hi-lighting paying Trenton businesses. This movie was not a drama but a compilation of shots of various people and places. The producer included the Jesse Owens track event in the movie as well as every person possible by filming other public events. The resulting silent movie was shown later at a Trenton theater to the delight of hundreds of locals who had never seen themselves on the big screen before. Footage was restored in the 1980s by local judge Eric Sonic and copies made for area residents.

Trenton was home to a Rock Island Railroad maintenance facility known as a roundhouse since 1900. The round house provided locomotive overhaul work for the Kansas City terminals and was a major employer for the Trenton area. A bitter strike in the 1940s pitted union workers against the railroad and scab labor who were still feeling the effects of the Great Depression. Strike breaking workers had to carry their tool boxes as they walked several miles to the round house. As a strike breaker named Hobbs walked across the bridge (now known as the Charlie Dye bridge) to Trenton in the early morning he encountered a group of striking union members drunk at the end of the bridge. He reached into his tool box and picked an item that would resemble a pistol and put it into his pocket. When he reached the thugs they jeered him but did not touch him since they had seen him put something in his pocket and he still had his hand on it. The next strike breaker that walked across the bridge was beaten to death.

Local authorities were hesitant to prosecute. Politics favored the strikers and no one was punished for the murder. Rock Island executives were outraged. They settled the strike but closed the roundhouse, moving the overhaul base to Kansas City. The result was that the trend of slow population growth was reversed and Trenton has slowly declined in population since that time.

Pete Taylor owned a canning plant in nearby Spickard, Missouri that canned tomatoes and other produce raised by local farmers. Taylor needed a cleaner water source than Spickard could provide so he moved his operation to a building a half block south of the east end of the 17th Street bridge in Trenton. Taylor quickly outgrew this building. He bought land to the east and began building the Trenton Foods Canning Plant. Taylor was bought out by Carnation (trademark) which was in turn was bought by Nestle. In 1998 the plant was acquired by ConAgra. The plant is the largest employer in the county and cans a variety of products including nacho cheese, chili, Vienna sausages, institutional foods, gravy, in the Libby's food line and other brands.

Trenton has two hazardous waste dump sites.[12] One is on the property of Modine Manufacturing, a plant that makes automobile radiators. Modine has produced a variety of acid, lead, and copper bearing waste products which in previous decades were buried on site and also at a public dump a mile north east of the plant.

There were 2,559 households of which 26.5% had children under the age of 18 living with them, 43.0% were married couples living together, 9.9% had a female householder with no husband present, 4.4% had a male householder with no wife present, and 42.7% were non-families. 37.9% of all households were made up of individuals and 19.5% had someone living alone who was 65 years of age or older. The average household size was 2.21 and the average family size was 2.89.

There were 2,673 households out of which 25.6% had children under the age of 18 living with them, 49.0% were married couples living together, 9.4% had a female householder with no husband present, and 38.6% were non-families. 35.2% of all households were made up of individuals and 19.6% had someone living alone who was 65 years of age or older. The average household size was 2.19 and the average family size was 2.81.

Trenton has an aquatic center at Moberly Park in the north side of the city, a modern movie theater with 3-D capabilities, a skating rink, two skateboarding parks (one indoor and one outdoor), as well as numerous city parks including ball fields and soccer fields.