This article is about Salon Aprons. For other uses, see Apron (disambiguation). 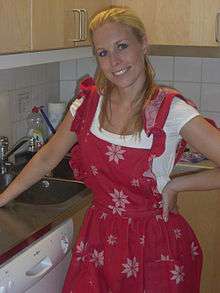 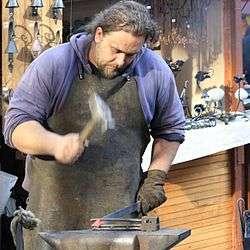 A blacksmith wearing an apron.

An apron is an outer protective garment that covers primarily the front of the body. It may be worn for hygienic reasons as well as in order to protect clothes from wear and tear, or else due to a symbolic meaning.

The apron is commonly part of the uniform of several work categories, including waitresses, nurses, and domestic workers. Many homemakers also wear them. It is also worn as a decorative garment by women. Aprons are also worn in many commercial establishments to protect workers clothes from damage, mainly bib aprons, but also others such as blacksmith or farrier aprons.

In addition to cloth, aprons can be made from a variety of materials. Rubber aprons are commonly used by persons working with dangerous chemicals, and lead aprons are commonly worn by persons such as X-ray technicians who work near radiation. Aprons, such as those used by carpenters, may have many pockets to hold tools. Waterproof household aprons, made of oilcloth or PVC are suitable for cooking and washing dishes.

The word apron is from the metanalysis of the term "a napron" to "an apron". The original spelling of napron has been lost (from the Old French naperon; Modern French napperon).[1]

There are many different apron forms depending on the purpose of the apron. A basic distinction is between waist aprons which cover the body from the waist down and a bib apron which also covers the upper part of the body.

An apron is usually held in place by two ribbon-like strips of cloth that are tied at the back. A bib apron may either have a strap around the neck (perhaps the most widespread use today), or shoulder straps that criss-cross at the back and attach to the waistband. The advantage of the former design is that it makes it especially simple to put on the bib apron. The advantage of the shoulder strap design is that it makes the apron more comfortable to wear; a neck strap can slightly impair ease of movement.

Some modern day aprons will have humorous expressions, designs or corporate logos.

Pinafores may be worn by girls and women as a decorative garment or as a protective apron. A related term is pinafore dress (American English: jumper dress); it is a sleeveless dress intended to be worn over a top or blouse.

A pinafore is a full apron with two holes for the arms that is tied or buttoned in the back, usually just below the neck. Pinafores have complete front shaped over shoulder while aprons usually have no bib, or only a smaller one. A child's garment to wear at school or for play would be a pinafore.

A tabard (British English; cobbler apron in U.S. English) is a type of apron that covers both the front and back of the body. It is fastened with side ties or with waist bands that tie in the back. It covers most of the upper part of the body and is used in many vocational occupations. The original cobbler's apron was typically made of leather.

An alternative version uses snaps instead of ties and closes at the front. Such an apron is in effect like a vest and is more commonly sold for domestic rather than occupational use.

A bungalow apron is an item of women's at-home clothing. Most bungalow aprons were extremely simple garments, often with kimono sleeves (sleeves cut in one piece with the body of the dress), little or no trim, and the fewest possible fasteners. Most date from the first half of the 20th century (roughly 1910 into the 1940s), when they evolved into or were replaced by the "patio dress" or "lounger" available today.

In contrast to most aprons, they were intended to be worn as a stand-alone garment,[2] not over another dress. They probably developed from the full-coverage wraparound or pullover aprons of the early years of the 20th century.

Bungalow aprons fell roughly between nightgowns or house coats and house-dresses; they were appropriate for morning in-home wear but would not have been worn outside of the house, as opposed to a true morning or house-dress, which might have been worn to the grocery store or in other informal situations.

Aprons in the home 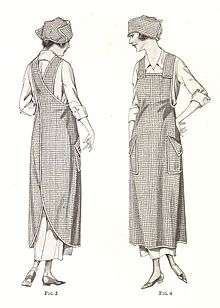 Woman of the 1920s wearing a full-length house apron with criss-cross straps.

The apron was traditionally viewed as an essential garment for anyone doing housework. Cheaper clothes and washing machines made aprons less common beginning in the mid-1960s in some countries such as the United States. However, the practice of wearing aprons remains strong in many places.

Today, the apron has enjoyed a minor renaissance in terms of both women and men now wearing them when performing household chores. For instance, an article in the Wall Street Journal claimed in 2005 that the apron is "enjoying a renaissance as a retro-chic fashion accessory" in the United States.[3] However, it still is not as prevalent as it was prior to the 1960s.

Aprons are nowadays considered equally appropriate for both women and men by most people. However, prevailing social norms ensure that women frequently wear more delicate clothing, and may therefore be more likely to want the protection an apron offers. This can also be because the apron is the traditional clothing for cooking and washing dishes, usually done by women.

When domestic workers are supplied a uniform by their employers, an apron is often included. The aprons are worn for hygienic as well as for identification purposes.

The term apron also refers to an item of clerical clothing, now largely obsolete, worn by Anglican bishops and archdeacons. The clerical apron resembles a short cassock reaching just above the knee, and is coloured black for archdeacons and purple for bishops. The apron is worn with black breeches, reaching to just below the knee, and knee-length gaiters. The history behind the vesture is that it symbolically represents the mobility of bishops and archdeacons, who at one time would ride horses to visit various parts of a diocese or archdeaconry. In this sense, the apparel was much more practical than a clerical cassock would be. In latter years, this vesture was more symbolic than practical, and since the mid-twentieth century it has fallen out of favour. 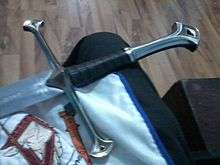 In freemasonry, each of the degrees to which its members belong has a specific way to wear the apron.[4]