Underpants (often abbreviated to pants in British English) are an undergarment covering the body from the waist or hips to the top of the thighs or knees. In British English the term refers to men's underwear, while in the US the term is gender neutral.[1] The equivalent woman's garment are panties or knickers. 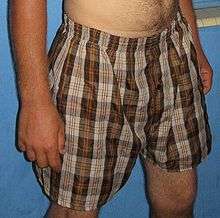 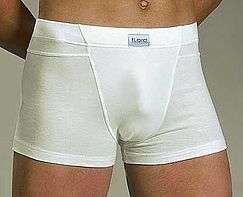 Boxer shorts, boxers, or trunks[2] have an elasticated waistband that is at or near the wearer's waist, while the groin sections are fairly loose and extend to the mid-thigh. There is usually a fly, either with or without buttons. The waistbands of boxer shorts are usually wider than those of briefs, and often bear the brand name of the manufacturer.

Boxer briefs are similar in style to boxer shorts, but are generally shorter and form-fitting like briefs.

Sometimes boxer briefs are called trunks,[3] but see next section.

Midway briefs are similar in style to boxer shorts, but are generally longer in leg than boxer briefs which is up to knees. 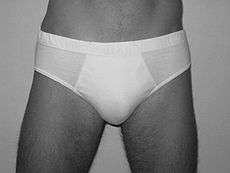 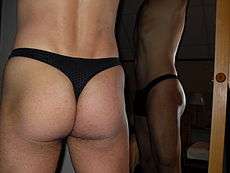 Trunks are shorter than boxer briefs but longer than briefs.[4]

Thongs are like briefs, except the backside is made to go between the buttocks.

Panties are a type of underpants for women.