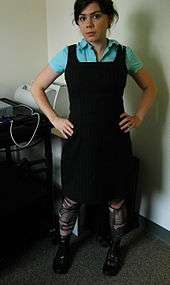 Contemporary outfit including a black jumper or pinafore dress.

A sundress, like a jumper, is sleeveless and collarless; however, such articles are not worn over a blouse or sweater, and are of distinctly different cuts and fashions. The apron dress may be viewed as a special case of the jumper. If the design of the dress is directly inspired by an apron (having a bib in front and ties in the back, for example), the garment is typically described as an apron dress.