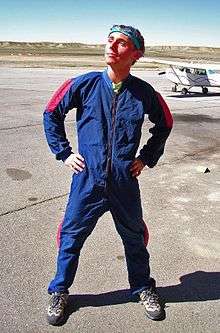 A man wearing a jumpsuit. 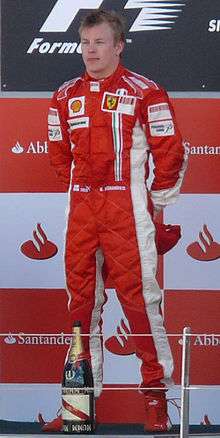 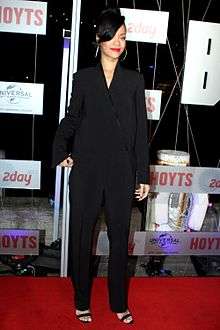 Singer Rihanna in a fashion jumpsuit in 2012.

Jumpsuit is a piece of clothing, originally referred to the functional one-piece garments used by parachuters/skydivers. More recently, it has come to be used as a common term for any one-piece garment with sleeves and legs and typically, though not always, without integral coverings for feet, hands or head.

The original skydivers' jumpsuits were simple garments designed to insulate the body from the cold of high altitudes and minimize risk of covering important handles and grips. Today, however, the garment has found other uses.

Jumpsuits are generally regarded as a garment of convenience, as they are simpler to launder, put on and remove than an ensemble outfit. Unless the jumpsuit has a drop seat, however, it is necessary to remove it entirely for bathroom use.

Aviators and astronauts sometimes wear insulated, fire-retardant jumpsuits or flight suits where other types of clothing can potentially float or flap about in zero gravity or during high-G maneuvers.

Drivers in motor racing wear jumpsuits for protection against fire and (in the case of motorcycle racers) leather suits for abrasion.[1]

Skiers wear insulated jumpsuits or ski suits to protect themselves from cold (especially after falling or tumbling in snow).

The jumpsuit's simple one-piece design also makes it a practical garment for tradesmen, such as cleaners, auto mechanics and plumbers, who often wear looser-fitting jumpsuits, or coveralls, where they need a better-protecting garment than an apron or bib.

The jumpsuit has sometimes been mandated as an institutional uniform, as it can be a unisex garment and can accommodate a wide range of body shapes.

A simple-to-launder one-piece garment can be especially convenient for parents to dress small children in. In countries with colder climates, snowsuits, or jumpsuits quilted or padded for warmth, are popular during the wintertime.

Jumpsuits have also reappeared from time to time in high fashion, where it is often attractive to designers because it has an unbroken line running from the neck to the feet and can be flattering on some body shapes.[3]

The word onesie is used to describe casual jumpsuits (to be used as loungewear or pyjamas) which became a fashion fad around 2010, but the word is sometimes also used for other forms of jumpsuits, like one-piece motorcycle suits or skisuits. 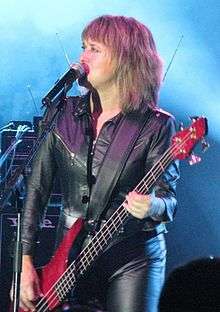 Starting in the 1960s, the jumpsuit has made occasional appearances in common and high fashion (particularly in the 1980s). They retain connotations of the future because they have been frequently featured in popular science fiction.[3]

Jumpsuits have often been used as stage costumes in stage productions and by various singers and bands. A black leather jumpsuit is part of Suzi Quatro's image. Elvis Presley, Mick Jagger, The Who, Queen, Feeder, Alphaville, Goldfrapp, Aaliyah, Britney Spears, Pink, Devo, Polysics, Spice Girls, Korn and Slipknot, for example, have all performed in flamboyantly-designed jumpsuit-like garments. Catsuits, or skin-tight jumpsuits of shiny fabric, have also been popular on stage.

On the TV series, Scrubs, the character Janitor is frequently called "jumpsuit" or referred to as wearing a jumpsuit, although he frequently corrects the speaker by pointing out that he is wearing a shirt and pants, commenting, "who wears a belt with a jumpsuit?"

In the episode "Looks and Books" of the 1999–2000 TV series Freaks and Geeks, one of the main characters, Sam Weir, gets talked into buying a baby blue jumpsuit by a smooth talking shop owner, played by Joel Hodgson. The shop owner promises Sam that this "Parisian nightsuit" will make him look like a "man of distinction" and effectively a "superstud".

David Sugalski, also known as The Polish Ambassador, is an electronic music artist that makes use of a vintage neon-yellow Swiss jumpsuit during his live shows.[4]

In the Portal video game series, the playable protagonist, Chell, wears a distinctive orange jumpsuit, which also led to jokes made inside the game by other characters.

In the British TV Series, Misfits, all of the ASBO characters wear orange jumpsuits. Curtis notably wears his tied off at the waist.

In the Fallout video game series, humans who live in the vault series of fallout shelters wear blue and yellow jumpsuits with the number of the particular vault on the back and the neck.