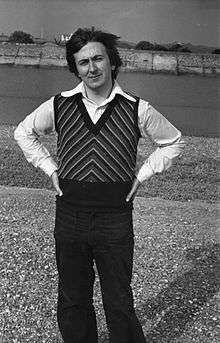 A sweater vest is an item of knitwear that is similar to a sweater, but without sleeves, usually with a low-cut neckline. They were popular in the 20th century, particularly in the 1970s in the UK, and are again growing in popularity in this century.[2]

The name "tank top", recorded in English since 1968, derives from its resemblance to a tank suit, a style of one-piece women's swimsuit with shoulder straps, so called since the 1920s, because it was worn in a "swimming tank", an obsolete term for a swimming pool. In American English, a tank top refers to a sleeveless shirt. 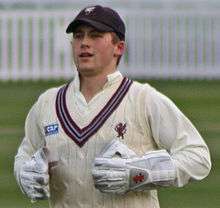 One of the most common patterns on a sweater vest is argyle. Many newer designs feature a return to popular patterns from eras past. Other variations include designs of a more modern nature, including stripes. Some of the most common of neckline shapes are the V-neck[3] and the crew neck, which is similar to a common T-shirt neckline.

Tank tops, white flannel pants and collared shirts are standard wear for professional cricketers in the UK, Australia, India, and South Africa. The cable knit vests often have a contrasting red, blue or green stripe around the neckline. Before shorts and polo shirts were introduced in the 1930s, tennis players wore a similar outfit.

In the early 20th century, golfers often wore an Argyle pattern tank top with their brogues, flat caps and plus fours. This was a more comfortable and practical alternative to the tweed cloth Norfolk jacket previously worn for outdoor pursuits.

Sweater vests are popular among sports fans, particularly those who play golf.[4] Those with sports team logos, especially NFL and college teams, are also popular and are frequently seen being worn by American football coaches, most notably Jim Tressel who has been given the nickname "The Sweater Vest" by many American football fans[5] despite the garment's origins at rival Michigan.[6]