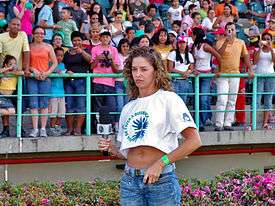 A crop top (also cropped top, belly shirt, half shirt, midriff shirt, midriff top, tummy top, short shirt, and cutoff shirt) is a top, the lower part of which is high enough to expose the waist, navel, or some of the midriff.[1] The cropping of a top in this manner is generally limited to female garments. Bikinis and sports bras are generally not regarded as crop tops.

Crop tops have been worn by men[2] generally during the 1970s[3] and the 1980s. The protective gear of American Football with no shirt resembles a crop top. Eventually cropped jerseys became available which carried over to several 1980s telecasts. Men also started to wear crop tops regardless of sport. Because of the varied acceptance for men wearing no shirt (eliminating the need for a crop top), and due to a change in school dress codes as well as peer pressure, men usually have no need nor wish for crop tops. Various crop tops have been worn by rappers as well as American Football athletes. However, in 2015 the NCAA[4][5] has increased restrictions on men wearing crop tops[6][7][8][9] which also includes rolling up longer jerseys.[10][11][12][13] However, the NFL has permitted to Elliott to wear rolled up jersey until September 2016. This is an isolated event, as most other sport uniforms (including the NFL) require men to wear long shirts.

In the 1980s, cutoff crop tops became more common as part of the aerobic craze and as a result of the popularity of the movie Flashdance. Singer Madonna wore a mesh crop top in her video for the song Lucky Star. It became common for women to crop sections of workout wear, such as sleeves, collars, and the hem of the shirt to create a loose-fitting top which was often worn over a body suit or tank top. Crop tops were also often paired with low-slung belts in the 1980s, angled at the side of the hip. But its popularity embarks on the 1990s. As mesh fabrics and oversized aerobics gear went out of fashion by the 1990s, the crop top reappeared in the form of the bustier, a lingerie-style shirt which revealed the midriff and was typically worn under a blazer or shirt. By the mid-1990s, the crop top took on the form of the babydoll shirt, a cropped, tight-fitting T-shirt which often featured graphic logos. Long-sleeved crop tops and even crop turtleneck tops also became fashionable for the first time, popularized by such public figures as country singer Shania Twain. By the late 1990s, crop tops had become so mainstream that many schools expressly banned garments that expose the midriff in their dress code.

While pop singers such as Britney Spears and Christina Aguilera popularized the crop top for teeny boppers in the 1990s, others were making a crop top fashion statement for pregnant women. Certain members of the all-female musical groups All Saints and the Spice Girls wore crop tops on stage during their pregnancies. Since 2000, cropped jackets and blazers have become more popular while the hemlines of shirts have mostly remained longer. In the 2010s, the crop top experienced a revival due to the popularity of 1990s nostalgia fashion.[14] [15][16]