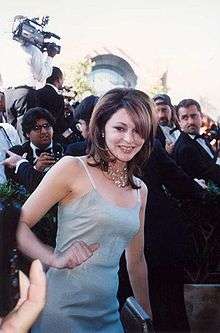 A slip dress is a woman's dress that closely resembles an underslip or petticoat.[1] It is traditionally cut on the bias, with spaghetti straps.[1] Slip dresses first became widely worn in the last decade of the 20th century, as part of the underwear-as-outerwear trend, when they were made from layered chiffon, polyester satins and charmeuse, and often trimmed with lace.[2] The slip dress looked like an undergarment, but was intended to be seen, and through the use of lace and sheer elements, offer glimpses of the body beneath.[3]

Designers associated with slip dresses include John Galliano, whose debut design for Dior was a lace-trimmed slip dress worn by Diana, Princess of Wales in 1996;[4] Calvin Klein and Narciso Rodriguez.[1]