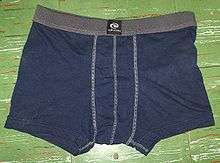 A pair of boxer briefs

Boxer briefs (or tight boxers) are a hybrid type of men's undergarment which are long in the leg, similar to boxer shorts, but tighter-fitting like briefs. Depending on the manufacturer, boxer briefs may also be spelled as one word: boxerbriefs. They are sometimes called "trunks" in the United Kingdom and Australia.[1]

Boxer briefs were pioneered by designer John Varvatos during his 1990–1995 stint at Calvin Klein as head of menswear design.[2] Made famous by a series of 1992 print ads featuring Mark "Marky Mark" Wahlberg,[2][3] they have been called "one of the greatest apparel revolutions of the century".[2] Of their creation Varvatos said in 2010, "We just cut off a pair of long johns and thought, this could be cool..."[2]

While some may find regular briefs too restrictive, others may find boxer shorts too loose. A pouch or "oversized" pouch may be built in to add space and position the testicles forward and give the penis more room. Boxer briefs are commonly used in athletics instead of, or in addition to a jockstrap, but are common for everyday usage as well.

The boxer brief design provides form-fitting coverage for the midsection from the waist to the thighs and are worn on the waist. They are usually made of a combination of cotton and spandex or a soft, woven flannel material. Boxer brief designs can have either a keyhole fly, button (snap) front, pouch, or no fly at all. The waistband is usually a separate band of elastic material, often in a contrasting color to the cotton or flannel material that comprises the rest of the boxer briefs. The elastic band often has the name of the manufacturer printed on it. There may also be additional elastic sewn around the bottom end of the thigh portion of the garment. Some boxer briefs have stitching on the rear to outline the buttocks and avoid a central seam. Boxer briefs provide more room for the male genitals than briefs, although they give less concealment from penile protrusion during an erection.[4] In response, some boxer short manufacturers have attempted to modify its internal design to give the crotch bulge better obscurity.[5][nb 1]