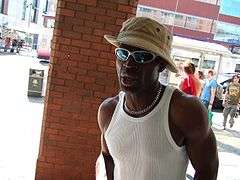 Example of t-shirt undershirt, usually not worn as outwear

An undershirt is an article of underwear worn underneath a dress shirt intended to protect it from body sweat and odors. Alternatively, it may be worn to protect the body from stiff or otherwise uncomfortable fabric that a person may be required to wear (such as a mandatory work uniform). It can have short sleeves or be sleeveless. The term most commonly refers to upper-body wear worn by males. This article of clothing typically has a low, round neckline that can be worn for athletic purposes.

It also makes dress shirts less transparent. It can also be worn during winter months as an extra layer of warmth.[1]

Factory mass-produced undershirts became common in the West in the early 20th century, with innovations turning the union suit into two pieces, for upper and lower body.