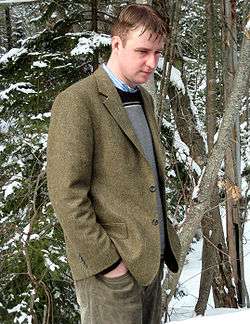 A sport coat as part of a smart-casual look.

A sport coat (American English), also called a sports jacket (British English), less commonly known as a sportcoat, is a jacket for men. Though it is of a similar cut and length to a suit jacket, a sport coat is less formal and is designed to be worn on its own without matching trousers. Styles, fabrics, colours and patterns are more varied than in most suits; sturdier and thicker fabrics are commonly used, such as corduroy, suede, denim, leather, and tweed.

Originally, sports coats were worn as casual attire for watching outdoor sports. With time, they came to be used on more formal occasions, sometimes being used in school uniforms.

A shooting jacket is a type of sports coat worn, as the name suggests, originally in the sports of shooting or hunting. It usually comes with a leather patch on the front shoulder to prevent recoil wear from the butt of a shotgun or rifle, frequently with matching leather patches on the elbow.

A hacking jacket is a wool sports coat for casual riding, often of tweed and traditionally 3 buttoned with a single vent.

A blazer is similar to a sports coat, and is tailored from solid color or striped fabrics. Blazers are often made with metal buttons reflecting their origins in the British Navy and the sport of boating, though this is not necessarily a defining feature. Blazers also often have patch pockets, unlike other kinds of coats.[1]