This article is about women's one-piece swimwear. For other uses, see One-piece (disambiguation). 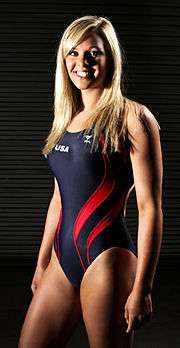 A one-piece swimsuit most commonly refers to swimwear worn by women and girls when swimming in the sea or in a swimming pool, or for any activity in the sun, such as sun bathing. Today, the one-piece swimsuit is usually a skin-tight garment that covers a female's torso, except may be the back or upper chest.

The most common type of one-piece suit is the maillot (a term that is not generally used any more) or tank suit, which resembles a sleeveless leotard or bodysuit. There are variants of the one-piece swimsuit, including halterneck styles and plunge front swimsuits, as well as wrap-round ("surplice") and bandeau styles. The pretzel suit is another style of the one-piece swimsuit. Recently, athletic swimsuits have used a variety of new shoulder strap styles, including the racerback, fastback, and flyback styles, some of which have also been used on other athletic wear. Another recent innovation in one-piece swimsuits is the bodyskin, which superficially resembles a unitard or wetsuit. Although these cover the entire torso, arms and legs, their function is not modesty, but reducing friction through the water for professional swimmers. Their surfaces are made of textured technical fabrics which are engineered to cut through the water in the same way as fish or shark skin. 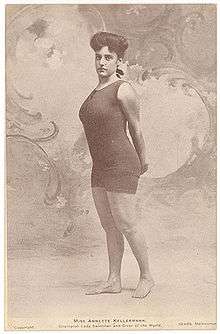 Annette Kellerman in the form-fitting one-piece tank suit that got her arrested in 1907
Main article: History of swimwear

The modern one-piece swimsuit made its appearance in the mid-1900s, when the style was widely described as a maillot. Its widespread acceptance is attributed to Australian swimmer Annette Kellerman, who attracted further attention to the style when, in 1907, she was arrested on a Boston beach for indecent exposure because her swimsuit showed arms, legs and the neck, a costume she adopted from England,[1] and which was similar to men's swimsuits of the time. The arrest prompted a wide public outrage which added to the acceptance of the style. Kellerman marketed these bathing suits and the style came to be known as "the Annette Kellerman". The one-piece swimsuit became accepted swimsuit attire for women in parts of Europe by 1910,[2] and other places, and was the authorised attire for women's swimming at the 1912 Summer Olympics, the first at which women competed.

Harper's Bazaar praised the Kellerman swimsuit, writing in June 1920 (vol. 55, no. 6, p. 138) - "Annette Kellerman Bathing Attire is distinguished by an incomparable, daring beauty of fit that always remains refined." The following year, in June 1921 (vol. 54, no. 2504, p. 101) it wrote that these bathing suits were "famous ... for their perfect fit and exquisite, plastic beauty of line."[1] In the United States, beauty pageants of women in bathing costumes became popular from the 1880s. However, such events were not regarded as respectable. Beauty contests became more respectable with the first modern "Miss America" contest held in 1921, though less respectable beauty contests continued to be held. Nevertheless, the Annette Kellerman continued to be considered by some as the most offensive style of swimsuit in the 1920s and became the focus of censorship efforts.[3][4] Even in 1943, pictures of the Kellerman swimsuit were produced as evidence of indecency in Esquire v. Walker, Postmaster General.[5][6]

During the 1920s and 1930s, people began to shift from "taking in the water" to "taking in the sun," at bathhouses and spas, and swimsuit designs shifted from functional considerations to incorporate more decorative features. Rayon was used in the 1920s in the manufacture of tight-fitting swimsuits,[7] but its durability, especially when wet, proved problematic,[8] with jersey and silk also sometimes being used.[9]

By the 1930s the necklines of women's swimwear plunged at the back, sleeves disappeared and sides were cut away and tightened. With the development of new clothing materials, particularly latex and nylon, through the 1930s swimsuits gradually began hugging the body, with shoulder straps that could be lowered for tanning.[10] Hollywood endorsed the new glamour with films such as Neptune's Daughter (1949) in which Esther Williams wore provocatively named costumes such as "Double Entendre" and "Honey Child".[11] Williams, who also was an Amateur Athletic Union champion in the 100 meter freestyle (1939)[12] and an Olympics swimming finalist (1940),[13] also portrayed Kellerman in the 1952 film Million Dollar Mermaid (titled as The One Piece Bathing Suit in UK).[14] American designer Adele Simpson, a Coty American Fashion Critics' Awards winner (1947) and a notable alumna of the New York art school Pratt Institute, who believed clothes must be comfortable and practical designed a large part of her wardrobe which included mostly one-piece suits that were considered fashionable even in early 1980s.[15] This was when Cole of California started marketing revealing prohibition suits and Catalina Swimwear introduced almost bare-back designs.[16]

Wartime production during World War II required vast amounts of cotton, silk, nylon, wool, leather, and rubber. In 1942 the United States War Production Board issued Regulation L-85, cutting the use of natural fibers in clothing[17] and mandating a 10% reduction in the amount of fabric in women's beachwear.[18] To comply with the regulations, swimsuit manufacturers produced two-piece suits with bare midriffs,[19] and dispensed with the skirt panels and other superfluous material. The fabric shortage continued for some time after the end of the war. 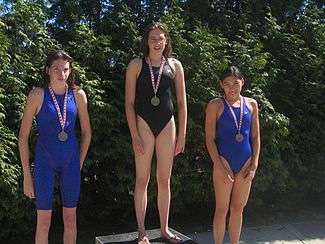 The two-piece swimsuit was making an appearance on beaches by the 1930s. Then in 1946, with post-war shortages still in place, Jacques Heim and Louis Réard separately launched their two-piece swimsuits, one named the "Atome" and the other the "Bikini". Heim's swimsuit was not considered beyond the styles that appeared in the 1930s, which still covered the wearer's navel, but Réard's bikini design shocked the press and public because it was the first to reveal the wearer's navel.[20] At first sales of Réard's bikini were limited. According to Kevin Jones, curator and fashion historian at the Fashion Institute of Design & Merchandising, "Réard was ahead of his time by about 15 to 20 years. Only women in the vanguard, mostly upper-class European women embraced it, just like the upper-class European women who first cast off their corsets after World War I."[21] It was banned in the French Atlantic coastline,[22] Spain, Belgium and Italy, three countries neighboring France, as well as Portugal and Australia, and it was prohibited in some US states,[23] and discouraged in others.[24] In 1951, the first Miss World contest (originally the Festival Bikini Contest),[25][26] was organized by Eric Morley.[27] When the winner, Kiki Håkansson from Sweden, was crowned in a bikini, countries with religious traditions threatened to withdraw delegates.[28] Håkansson remains the first and last Miss World to be crowned in her bikini,[29] a crowning that was condemned by Pope Pius XII who declared the swimsuit to be sinful.[30][31] Bikinis were banned from beauty pageants around the world after the controversy.[32] In 1949 the Los Angeles Times reported that Miss America Bebe Shopp on her visit to Paris said she did not approve the bikini for American girls, though she did not mind French girls wearing them.[33] Actresses in movies like My Favorite Brunette (1947) and the model on a 1948 cover of LIFE were shown in traditional two-piece swimwear, which covered the navel, not the bikini.