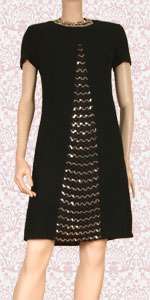 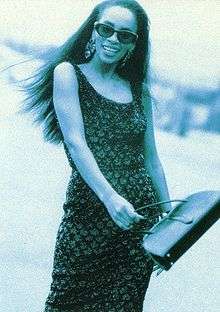 Jody Watley in a 1950s black sequined cocktail dress in 1990

A cocktail dress or cocktail gown is a woman's dress worn at cocktail parties and semi-formal or "black tie" occasions.

The modern definition of a cocktail dress is commonly taken to mean a shorter dress above the knee. It must be smart, such as the little black dress, and may have sequins or lace as a feature.

At semi-formal occasions, a less elaborate, shorter-length cocktail dress may be worn. Prior to the mid 20th century this type of dress was known as 'late afternoon'. When gentlemen are in business suits, ladies also wear dress suits or "good" afternoon skirt and dresses.

In the mid-20th century, some couturiers began describing full-skirted cocktail gowns as "dancing costumes". These are suitable for formal dances but not for balls, or other white tie affairs, where ball gowns are worn.

Christian Dior was the first to use the term "cocktail dress" to refer to early evening wear, in the late 1940s.[1]