This article is about the woman's garment. For the papal or religious garments called "house dress", see Papal regalia and insignia § Ordinary dress. 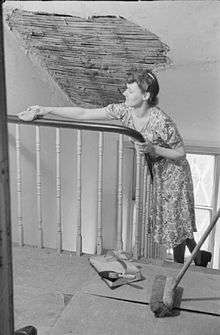 A housewife in 1941 wearing a printed cotton house dress.

A house dress is a type of simple dress worn informally in the mornings at home for household chores or for quick errands.[1] The term originated in the late nineteenth century to describe at-home garments designed for maximum practicality and usually made from washable fabrics. It is directly descended from the Mother Hubbard dress.[2] Such dresses were a necessary part of the housewife's wardrobe in the early twentieth century and could be widely purchased through mail-order catalogues.[1]

Although an informal garment, the house dress, particularly during the 1950s, was intended to be stylish and feminine as well as serviceable.[3] The concept of attractive house dresses was popularised in the late 1910s by Nell Donnelly Reed, whose "Nelly Don" housedresses (manufactured by The Donnelly Garment Company) established that house dresses could be both attractive and practical.[4] The company, renamed Nelly Don after Reed's retirement, quickly became one of the most successful American clothing manufacturers of the 20th century.[4] Some designers became known for house dress designs, such as Claire McCardell, whose 1942 'popover' wrap dress was equally wearable as a house dress, a dressing-gown, a beach cover-up or even a party dress.[5] The house dress version of McCardell's popover came with a matching oven glove.[6]