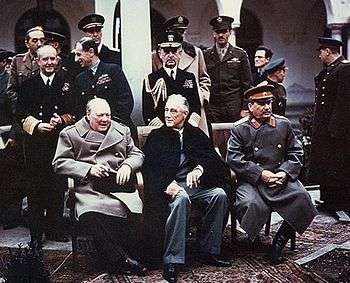 Churchill at the Yalta summit, wearing a British Warm

A British Warm,[1] British warm[2] or British Warm overcoat is a type of woollen overcoat based on the greatcoats worn by British Army officers in the First World War.[3]

The British warm first appeared around 1914 as a military greatcoat for British officers. It was made famous, however, by Winston Churchill.[4] According to Scottish clothmakers, Crombie, the term "British Warm" was coined to describe their version of the coat which was worn by around 10% of British soldiers and officers.[5]

A British warm is typically designed as a heavy, double-breasted, wool coat made from a 100% wool cloth known as Melton.[4] It is taupe-coloured, has peak lapels and leather buttons, often has epaulettes and is slightly shaped. It falls just above the knee. It is also sometimes belted.[3]