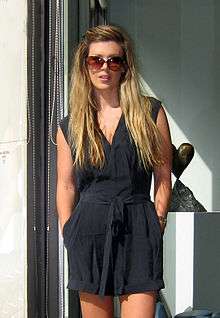 A woman wearing a romper. 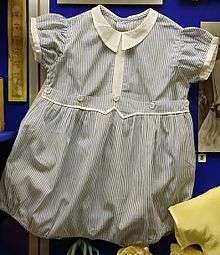 A romper suit, or just romper, is a one-piece combination of shorts and a shirt worn both by children and adult women.

Rompers appeared in the United States of America in the early 1900s.[1] They were popular as playwear for younger children because people thought they were ideal for movement.[2] Rompers were in many ways the first modern casual clothes for children. They were light and loose fitting, a major change from the much more restrictive clothing children wore during the 19th Century Victorian era.[3] Styles and conventions varied from country to country. In France they were, for many years, only for boys.[4] While primarily a play garment, we note French children wearing dressy rompers. Their popularity peaked in the 1950s when they were used by children as playwear and by women as leisure- and beachwear. Thereafter the garment has continued to be used by infants and toddlers; however, it has become less common among older girls and women, although never disappearing entirely.

While rompers had been popular in among women in the 1950s, they re-emerged in the 1970s as a fashion for adult women. In the 1970s rompers were usually a casual garment made of terrycloth, and often in a tube top style. They were common in the 1980s in a wider variety of materials. Since 2006, rompers have enjoyed a minor renaissance as a fashionable garment for women. Several designers have presented collections including romper suits and they are offered by many retailers. Designers include Deborah Sweeney[5] and Juliette Hogan[6]

In the 2010s the "sleep romper" for women gained popularity, being similar in style to the teddy, but with the appearance of shorts.