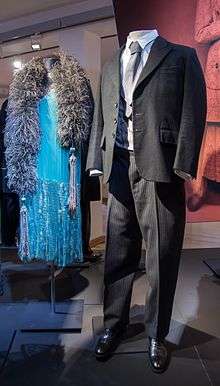 A Stresemann in an exhibition of the Textilfabrik Cromford, Germany

The stroller, also known as a Stresemann, a director, or simply black lounge is a form of men's semi-formal daytime dress comprising a single- or double-breasted coat (grey or black), grey striped or checked formal trousers, a necktie (grey or silver), and a waistcoat (dove grey, funeral black, or buff). This makes it largely identical to the formal morning dress from which it is derived, with the exchange of a suit jacket for a morning coat, and the almost exclusive use of a necktie and turndown collar. The correct hat is a bowler, boater hat or Homburg.

For a semi-formal day wedding, the groom dresses in a dark-grey coat with a dove-grey or buff waistcoat; for a funeral, the mourner wears a matching black coat and waistcoat. Traditionally, in the Continent and the Commonwealth, morning dress is worn to formal day events; the stroller in the U.S. (The stroller is the daytime equivalent of the semi-formal evening dress dinner jacket or tuxedo (black tie); morning dress is the daytime equivalent of evening formal dress (white tie).) The recent trend in weddings of ambiguous formality in the United States has led to a sharp decline in the use of either formality.

The term stroller is only used in the US and is unknown in the UK, where, though the garment itself saw a limited period of popularity, was simply called black lounge. Because black was then reserved for formalwear, it was unknown as a colour for lounge suits, so the term was unambiguous. In the UK this mode of dress is now extremely unusual, though some Masonic Lodges which meet during the day rather than (as is more common) in the evening do continue to specify it as their dress code. But this could be because the Masonic Lodges emulate their meetings as celebrated at noon so that even an evening meeting must be attended in the daytime dress. It also still is worn within the legal profession, especially by barristers, indeed the striped trousers are in some circles referred to as "barrister trousers". 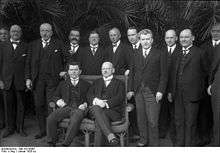 Gustav Stresemann (sitting on the right, with Augustinas Voldemaras), Berlin 1928

In German, a stroller is called a Stresemann, after the Weimar German chancellor Gustav Stresemann. Stresemann, like other German politicians of his age, wore morning dress or a frock coat in the Reichstag or when making public appearances. However, Stresemann found the long coat impractical for daily work in the Chancellery. To avoid having to change completely, he began to wear the prototype of this jacket at his office, while switching to a morning coat when engaged on more formal business. The style was introduced during the negotiations of the Locarno Treaties in 1925 and quickly caught on as a more practical variation on morning dress. In Japan, it is known as a "director's suit", from the term inside director.

The stroller's apparent decline in use, as opposed to the staying power of its evening counterpart, the dinner jacket, could be attributed to several factors. Daytime formality in general, and specifically the standard of changing clothes for various occasions, fell out of practical use in post-World War II western society. Strollers were often associated with uniformed servants; a concept which had also fallen out of favor. By the late 20th century, fictional characters in media depicted wearing strollers were often portrayed as self-important or inflexible snobs; which was the antithesis of popular culture.

Winston Churchill is depicted in many photographs and paintings wearing a black stroller and striped formal trousers while serving as Prime Minister of the United Kingdom.

At his second inauguration in 1985, U.S. President Ronald Reagan wore a black stroller.

In the 1964 Walt Disney film Mary Poppins (set in the 1910s), the character of Mr. Banks wears a stroller to work every day at the bank.

In the long-running BBC sitcom Are You Being Served? (1972-1985), the character Captain Peacock always wore a stroller as the store's floorwalker.

Gentlemen's valets of the early 20th century are often depicted in television and film wearing strollers as their standard apparel. The character of John Bates of Masterpiece's Downton Abbey typically appears in a stroller while serving as his lord's valet.