For other uses, see Scrub. 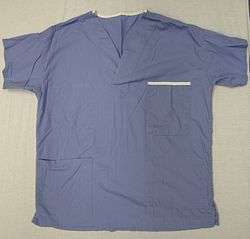 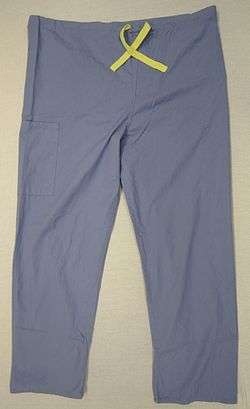 Scrubs are the sanitary clothing worn by surgeons, nurses, physicians and other workers involved in patient care in hospitals. Originally designed for use by surgeons and other operating room personnel, who would put them on when sterilizing themselves, or "scrubbing in", before surgery, they are now worn by many hospital personnel. Their use has been extended outside hospitals as well, to work environments where clothing may come into contact with infectious agents (veterinarians, midwives, etc.). Scrubs are designed to be simple (with minimal places for contaminants to hide), easy to launder, and cheap to replace if damaged or stained irreparably. In the United Kingdom, scrubs are sometimes known as Theatre Blues.

The spread of methicillin-resistant Staphylococcus aureus (MRSA) has increased the use of scrubs but can give wearers a false sense of security that they are 'clean' when in fact are as easily contaminated as any other clothing.[1]

In contrast to the uniforms long required of nurses, surgeons did not wear any kind of specialized garments until well into the 20th century.[2] Surgical procedures were conducted in an operating theater. The surgeon wore his own clothes, with perhaps a butcher's apron to protect his clothing from blood stains,[3] and he operated bare-handed with non-sterile instruments and supplies. (Gut and silk sutures were sold as open strands with reusable hand-threaded needles; packing gauze was made of sweepings from the floors of cotton mills.) In contrast to today's concept of surgery as a profession that emphasizes cleanliness and conscientiousness, up to the early 20th century the mark of a busy and successful surgeon was the profusion of blood and fluids on his clothes.[4] The importance of dress as a badge of one's class in society was paramount and the processes behind the transmission of infection were the subject of controversy within the profession.

With the "Spanish flu" pandemic of 1918 and the growing medical interest in Lister's antiseptic theory, some surgeons began wearing cotton gauze masks in surgery; however, this was not to protect the patient from intra-operative infection, but to protect the surgeon from the patient's diseases. Around the same time, operating theatre staff began wearing heavy rubber gloves to protect their hands from the solutions used to clean the room and equipment, a practice surgeons grudgingly adopted.

By the 1940s, advances in surgical antisepsis (now called aseptic technique) and the science of wound infection led to the adoption of antiseptic drapes and gowns for operating room use. Instruments, supplies and dressings were routinely sterilized by exposure to either high-pressure steam or ethylene oxide.

Originally, operating room attire was white to emphasize cleanliness. However, the combination of bright operating lights and an all-white environment led to eye strain for the surgeon and staff. By the 1950s and 1960s, most hospitals had abandoned white operating room apparel in favor of various shades of green, which provided a high-contrast environment, reduced eye fatigue, and made bright red blood splashes less conspicuous.

By the 1970s, surgical attire had largely reached its modern state—a short-sleeve V-necked shirt and drawstring pants or a short-sleeve calf-length dress, made of green cotton or cotton/polyester blend. Over this was worn a tie-back or bouffant-style cloth cap, a gauze or synthetic textile mask, a cloth or synthetic surgical gown, latex gloves, and supportive closed-toe shoes. This uniform was originally known as "surgical greens" because of its color, but came to be called "scrubs" because it was worn in a "scrubbed" environment.

In many operating rooms, it is forbidden to wear any exposed clothing, such as a t-shirt, beneath scrubs. As scrubs are designed to promote a clean environment, the wearing of outside clothing is thought to introduce unwanted pathogens. 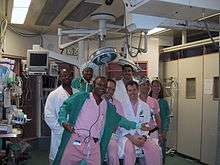 Nearly all patient care personnel at hospitals in the United States wear some form of scrubs while on duty, as do some staffers in doctor, dental, and veterinary offices. Doctors in the United States may wear their own clothes with a white coat except for surgery. Support staff such as custodians and unit clerks also wear scrubs in some facilities. When the medic is not performing surgery the scrub is typically worn under a white coat.

In the UK, all NHS hospital trusts have stringent clothing policies, and many of these specifically forbid wearing the iconic white coat for medical staff, owing to infection control concerns. This has meant that several hospitals around the UK have opted for scrubs for staff, especially in Accident and Emergency departments. 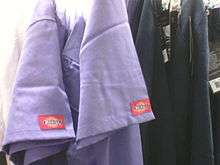 Dickies scrubs uniforms on the rack in a Work 'n Gear store in Dorchester, Massachusetts (December 2012)

Today, any medical uniform consisting of a short-sleeve shirt and pants is known as "scrubs". Scrubs may also include a waist-length long-sleeved jacket with no lapels and stockinette cuffs, known as a "warm-up jacket".

Non-surgical scrubs come in a wider variety of colors and patterns, ranging from official issue garments to custom made, whether by commercial uniform companies or by home-sewing using commercially available printed patterns.

Custom-made printed scrub tops, featuring cartoon characters and cheerful prints, are common in pediatricians' offices, veterinary offices, dental clinics and children's hospitals, and prints for various holidays can be seen throughout the year. Some acute care facilities or larger hospitals also have relaxed rules regarding the wear of non-regulation scrubs in non-surgical units, and they are no longer just the classic v-neck scrub tops, but are now offered in many styles and patterns.

The scrub industry, much like maternity wear, used to have very limited fashion options. Indeed, scrubs were generally box shaped and ill fitted; often with limited design choices. Over the past 10 years, the scrub industry has taken notice of the individual preferences of medical professionals and have begun to design and manufacture fashionable and unique designs.

Laundry service in a medical facility in Sierra Leone. The scrubs are cleaned in-house to prevent the spread of disease.

Surgical scrubs are not generally owned by the wearer. Due to concerns about home laundering and sterility issues, these scrubs are usually hospital-owned or hospital-leased through a commercial linen service.

Scrub caps have graduated from being functional to also being a personalized accessory both in the operating room and outside. Before the antiseptic focus of the 1940s, hats were not considered essential to surgery. From the 1940s through the 1950s, as a hygienic focus swept the industry, hats became standard wear to help protect patients from contaminants in hair. Full-face hats were even designed for men with beards. These hats have been and continue to be distributed by group purchasing organizations (GPOs) who supply hospitals with most equipment.

In the medical fashion 'revolution' of the seventies, more and more medical professionals began personalizing their scrubs by either sewing their own hats or buying premade hats made of eclectic fabric. Several styles were popular, including the 'bouffant' surgical cap, a utilitarian hairnet-like hat which typically comes in light blue, and the 'milkmaid', a bonnet-like wrap around hat.

Bouffant surgical caps are perhaps the most widely used scrub hats in hospitals, and their usage is not limited to only nurses and surgeons: hospital patients are required to wear a bouffant cap when having surgery of any kind.