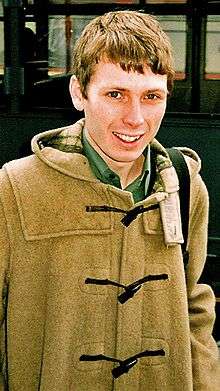 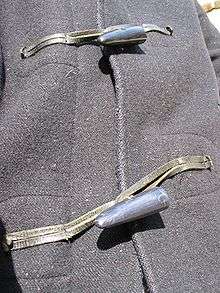 A duffel coat, or duffle coat (standard UK spelling), is a coat made from duffel, a coarse, thick, woollen material. The name derives from Duffel, a town in the province of Antwerp in Belgium where the material originated. Duffel bags were originally made from the same material. The duffel coat may have initially come from the Polish military frock coat, which was developed in the 1820s. The hood and toggle fastenings proved popular and it spread across Europe by the 1850s. By 1890 it was being supplied to the British Royal Navy, and Field Marshal Montgomery was a famous wearer of the coat in World War II. After the war, the coats became available as government surplus stock and became popular, especially with students.

The coat is made of dense woollen cloth, and distinctive features include a capacious hood that can be worn over a uniform cap, three or four wood or horn toggles with leather loops for ease of fastening when wearing gloves, a buttonable strap neck and two large outside patch pockets. Early versions were knee-length but later ones were shorter. Modern coats are made in a softer woollen material. The coat has had many notable wearers and is associated with left-wing politics.

There are many varying styles to the duffel coat, although the original British style would be composed of the following features:

The wooden toggle-fastenings were made to be easily fastened and unfastened while wearing gloves in cold weather at sea. Current designs often have toggles made of buffalo horn, or plastic. The oversized hood offered enough room to wear over a Naval cap.

After rain, a duffle coat has a characteristic smoky smell.

The initial influence of what became the duffle coat, may have been the hooded Polish military frock coat, which was developed in the 1820s. It had the unusual features of a toggle closure and an integrated hood,[1] and by 1850 had spread through Europe.[2] In the 1850s, outerwear manufacturer John Partridge developed the first version of the duffle coat.[3]

In the 1890s the British Admiralty chose a number of manufacturers to produce duffle coats for the Royal Navy,[4] where it was referred to as the "convoy coat"[5] The navy issued a camel-coloured variant of it as an item of warm clothing during World War I,

The design of the coat was modified slightly and widely issued during World War II. Field Marshal Montgomery was a famous wearer of the coat,[6] as a means of identifying himself with his troops, leading to another nickname, "Monty coat".

Large stocks of post-war military surplus coats available at reasonable prices to the general public meant that these coats became a ubiquitous and popular item of clothing in the 1950s and 1960s especially among students. The British firm Gloverall purchased surplus military supply of coats after World War II, and in 1954 started producing their own version of the Duffle coat using leather fastenings and Buffalo horn toggles with a double-faced check back fabric, and many other modern versions copy some or all of those features.[7] 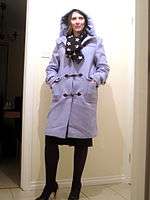 In modern times, the type of fabric used to make duffel coats is known as Melton cloth, as opposed to modern duffel cloth which is a softer wool fabric with a distinct nap, used for high-end coats and parkas.

In Italy the duffle coat is called 'Montgomery'.

In the 1949 movie The Third Man, a main character, British Major Calloway (Trevor Howard), wears a duffle coat in nearly all of his scenes.

For many years they were seen in the popular press as a form of uniform for stereotyped supporters of the left wing, as characterised by Labour leader Michael Foot. Other famous duffle coat wearers include members of Scottish band Belle and Sebastian, American businessman David Woodard, English actor Dudley Moore, television character Jonathan Creek, children's book and television character Paddington Bear, Ed Helms as Andy Bernard in the American version of the popular British television comedy show The Office, and all members of the English rock music group Oasis on the cover of their 1995 hit single "Roll with it".