This article is about the skirt/dress/coat style. For the sleeveless shirt, see A-shirt. For other uses, see A-line. 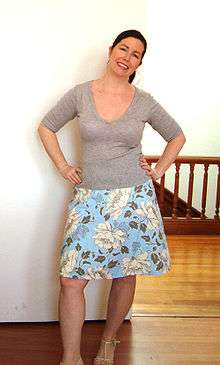 A woman wearing an A-line skirt. These are usually fitted at the upper hip

An A-line skirt is a skirt that is fitted at the hips and gradually widens towards the hem, giving the impression of the shape of a capital letter A. The term is also used to describe dresses and coats with a similar shape.[1] 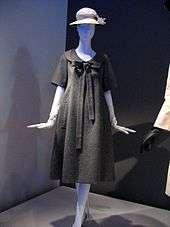 The term was first used by the French couture designer Christian Dior as the label for his collection of spring 1955.[2] The A-Line collection's feature item, then the "most wanted silhouette in Paris", was a "fingertip-length flared jacket worn over a dress with a very full, pleated skirt".[2]

Although an A-shape, this silhouette was not identical to what is now understood to embody the A-line idea.[2] That idea was given its definitive expression and popularized by Dior’s successor, Yves Saint Laurent, with his "Trapeze Line" of spring 1958, which featured dresses flaring out dramatically from a fitted shoulder line.[2]

A-line clothes remained popular in the 1960s and 70s, disappeared from fashion almost completely by the early 1980s and were revived by the retro trend of the late 1990s.[2] By that time, "A-line" was used more loosely to describe any dress wider at the hips than at the bust or waist, as well as a number of flared skirt styles.[2] "True" A-line shapes on the pattern of Dior and Saint Laurent saw a revival in the early 2000s.[2]

The A-line skirt has no visible embellishments for ease, such as pleats or slits, but is fitted to the upper hip by means of seams and/or darts. However, denim A-line skirts often have buttons down the center seam. Its fastening is usually kept discreet, with a side or back zipper. A belt is sometimes used. Pockets may be present, but not usually. The length of an A-line skirt varies, between mini- and below-knee-length.

It is often used to describe a popular style of wedding dress, which is fitted above and around the hips but flares gently to the hem, giving a streamlined and quite slim look.