For the EP by Eskimo Joe, see Sweater (EP). 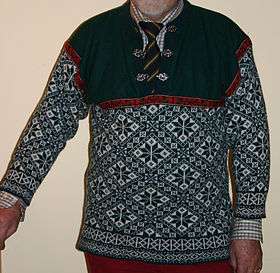 A sweater (North American English) is a knitted garment intended to cover the torso and arms.[1] A sweater is either a pullover or a cardigan, distinguished in that cardigans open at the front while pullovers do not. In British English, a pullover may also be called a jumper or jersey. There is no hypernym equivalent to sweater covering both pullovers and cardigans.

Sweaters are worn by adults and children of all genders; often over a shirt, blouse, T-shirt, or other top, but sometimes next to the skin. Sweaters were traditionally made from wool, but can now be made of cotton, synthetic fibers, or any combination thereof. Sweaters are maintained by washing or dry cleaning, and the use of a lint roller or pill razor. 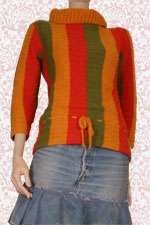 The term "sweater" is a catch-all for a variety of knit garments. Although the term often refers to a pullover, it can also refer to a cardigan, a garment that opens and fastens down the front. Within either group, there is a great variety of design. Various necklines are found, although the V-neck, turtleneck and the crew neck are the most popular. The waistline is typically at hip height or slightly longer, just overlapping the waist of one's pants or skirt, but can vary significantly. It can range from just below the bust in women's garments to mid-thigh in either sex, or even longer in a knitted variation of the poncho shirtdress. The sleeve length is also variable, ranging from full-length or three-quarters to short-sleeved, cap sleeves or sleeveless. The front seam or opening of a cardigan allows for further different styles, such as a surplice or a bolero jacket. All hems may have various types of borders, such as picots, ribbing and frills.

Knitted fabrics are generally somewhat elastic and have a softer hand (feel or drape) than woven fabric, sweaters that are more tightly fitted or have a soft drape may conform well to the body without requiring tailoring necessary in a woven garment such as darts, flares and gores. Even when such shaping is used, it can be knit into the fabric itself, without requiring seams.

Another type is a Sweater_vest 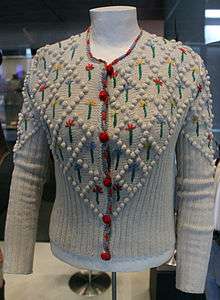 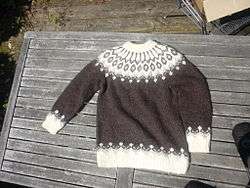 A pullover from Iceland 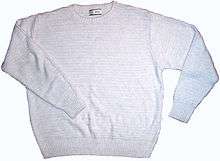 A sweater with an open front fastened by buttons or a zipper is generally called a cardigan, but the nomenclature for other styles in different dialects can be quite confusing. In British English, a sweater may also be called a pullover, jumper or jersey. In the United States however, "jumper" refers to a style of women's sleeveless dress, worn over a blouse or shirt, and "jersey" refers to a knit shirt, especially if part of an athletic uniform. If sleeveless, such a garment may be called a "slipover" or "tank top" in British English, while "tank top" in US English refers to a sleeveless shirt or undershirt. In the U.S. a sleeveless sweater may also be called a sweater vest, especially if it has a V-neck and somewhat formal appearance resembling a formal vest, a garment known as a waistcoat in the U.K. In British English, "vest" refers to an undershirt. In South African English, a sweater is always called a jersey. In the sport of ice hockey, the top of a hockey player's uniform had traditionally been a sweater; and even though modern hockey uniform tops are more commonly a jersey they are typically referred to as a "hockey sweater," regardless of the style, but frequently, in the U.S. it is called a hockey "jersey." 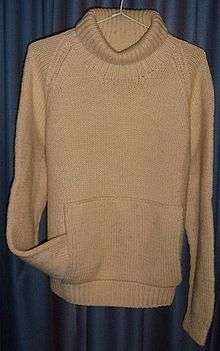 Thin sweaters may be worn tucked into the waistband of trousers; but otherwise, men's sweaters are worn untucked. Nonetheless, some individuals, including some television and film actors, have been known for wearing tucked-in sweaters.[2]

Sweaters are a versatile item of clothing and can be worn on top of almost any outfit. Sports sweaters are often worn on tops of sports kit while traveling to or from a sports ground. Sweaters can be worn with a dress shirt underneath (and optionally a tie), which has the advantage of allowing the wearer to have the option of removing the sweater when it is uncomfortably warm and still looking presentable in many situations. Layering and the ease with which it allows for temperature regulation is a major benefit of the sweater as an article of clothing. Various methods have evolved for conveniently carrying a sweater, once removed. The three most common approaches are: around the waist (either loin cloth or knotted in front style) and over the shoulder.

In the late 20th century the sweater increasingly came to be worn as an alternative to a shirt when finer materials made them more comfortable next to the skin.

Some people enjoy wearing Christmas-related sweaters around Christmas time to get into the festive spirit. Some women's sweaters are meant to be worn belted; a belt or drawstring is sometimes knitted into the sweater itself. Leggings are commonly worn with long sweaters or sweater dresses.

The uniforms that present day ice hockey players wear are sometimes referred to as "sweaters", although they nowadays usually more closely resemble the jerseys worn in other sports like soccer. This is because original uniforms were simply sweaters with the team's logo stitched on the front. However, as technology changed, so did the uniforms as actual sweaters absorbed too much moisture and became weighed down and bulky throughout the course of a game.

Sweatshirts are arguably a type of sweater, but made of a fabric and cut similar to sweatpants. A sweatshirt worn with sweatpants forms a sweatsuit a kind of exercise clothing designed to raise the core body temperature and cause perspiration in order to lose body weight before a weigh in for a weight divided sport. It is fashioned out of a thick, usually cotton jersey material. Sweatshirts are also almost exclusively casual attire and not dressy as some other sweaters may be. Sweatshirts may or may not have a zipper or hood.