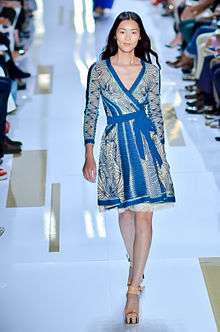 A wrap dress is a dress with a front closure formed by wrapping one side across the other, and knotting the attached ties that wrap around the back at the waist or fastening buttons. This forms a V-shaped neckline and hugs the wearer's curves. A faux wrap dress resembles this design, except that it comes already fastened together with no opening in front, but instead is slipped on over the head. A wrap top is a top cut and constructed in the same way as a wrap dress, but without a skirt.

Although it is often claimed that Diane von Fürstenberg 'invented' the wrap dress in 1972/73,[1] Richard Martin, a former curator of the Costume Institute at the Metropolitan Museum of Art, noted that the form of Fürstenberg's design had already been "deeply embedded into the American designer sportswear tradition," with her choice of elastic, synthetic fabrics distinguishing her work from earlier wrap dresses.[2] Wrap dresses had been designed by Elsa Schiaparelli in the 1930s,[3][4] and Claire McCardell in the 1940s, whose original 'popover' design became the basis for a variety of wrap-around dresses.[5]

The Fürstenberg interpretation of the wrap dress, which was consistently knee-length, in a clinging jersey, with long sleeves, was so popular and so distinctive that the style has generally become associated with her.[6][7][8] She has stated that her divorce inspired the design,[9] and also suggested it was created in the spirit of enabling women to enjoy sexual freedom.[10] In 2004 a book dedicated entirely to Fürstenberg's wrap dresses was published.[11]

Wrap dresses achieved their peak of popularity in the mid to late 1970s, and the design has been credited with becoming a symbol of women's liberation in the 1970s.[12][13] They experienced renewed popularity beginning in the late 1990s, particularly after von Fürstenberg reintroduced her wrap dress in 1997; she, among others, has continued to design wrap dresses since then.[7][14] The wrap dress's popularity and its perceived feminist significance have remained current into the mid-2010s.[13]