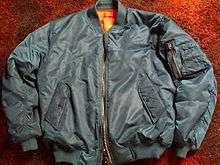 A flight jacket, bomber jacket, or bombardier jacket is a jacket originally created for military pilots. The style eventually became part of popular culture and apparel.

In World War I, most airplanes did not have an enclosed cockpit, so pilots had to wear something that would keep them sufficiently warm. The U.S. Army officially established the Aviation Clothing Board in September 1917 and began distributing heavy-duty leather flight jackets; with high wraparound collars, zipper closures with wind flaps, snug cuffs and waists, and some fringed and lined with fur.

Leslie Irvin first designed and manufactured the classic sheepskin flying jacket. In 1926 he set up a manufacturing company in the United Kingdom, and became the main supplier of flying jackets to the Royal Air Force during most of World War II. However, the demand during the early years of the war was so great that the Irvin company engaged subcontractors, which explains the slight variations of design and colour that can be seen in early production Irvin flying jackets.

As aerospace technology improved, the altitudes at which aircraft operated increased. Most heavy bombing raids in Europe during World War II took place from altitudes of at least 25,000 ft, where ambient temperatures could reach as cold as −50 °C (−58 °F). The cabins of these aircraft were uninsulated, so a warm, thick flight jacket was an essential piece of equipment for every member of the crew.

Flight jackets in the United States

The two most historical and well-known American flight jackets are the A-2 jacket and the G-1. Although General “Hap” Arnold cancelled the original A-2 after twelve years because he wanted "something better", the A-2 remains the most recognizable and sought-after American flight jacket. The G-1, designed by the U.S. Navy to parallel the Air Corps’ A-2, lasted until 1978, when U.S. Congress cancelled it due to its tremendous popular appeal, which was overwhelming the Navy’s supply system. Their popularity evolved into symbols of honor, adventure, and style. Hollywood films like Top Gun boosted sales of the G-1 tremendously, making bomber jackets collector and fashion items.

In addition to the A-2 and G-1 jackets, shearling jackets, originally lined with fur, are recognized for being the warmest flight jackets. Even when the fur was replaced with wool, this coat was warm enough to keep Lt. John A. Macready warm when he set a world record in April 1921, reaching an altitude of 40,000 feet in his open-cockpit airplane. Styles range from the B-3 "bomber jacket", to the M-445, the U.S. Navy’s shearling jacket. Also popular in the military were, and still are, synthetic jackets. These jackets first gained esteem after General Hap Arnold rejected the A-2 jacket in 1942. Styles range from the cotton twill B-series to the standardized jacket of the U.S. Navy, the CWU-series. Both synthetic and shearling jackets are worn and collected by army buffs today, but neither has the historical status of the A-2 jacket or the G-1.

Today, flight jackets are usually associated with the MA-1, a now-obsolete U.S. military jacket, which is mostly found in sage green. It is made with flight silk nylon and usually has a blaze orange lining, with the specification tag in the pocket, though earlier models had a sage-green lining and the specification tag on the neck area. It has two slanted flap pockets on the front, two inner pockets, and a zipped pocket with pen holders on the left sleeve. The lighter weight version of the MA-1 is known as the L-2B flight jacket, which in turn, replaced both the original L2 and L2A jackets, which all three differentiate from the MA-1 as they have snap-down epaulets and no inside pockets. The military flight jackets currently used today are the CWU-45P (for colder weather) and the CWU-36P (for warmer weather); both are made from Nomex.

Flight jackets have been popular with skinheads and scooterboys from the 1970s onwards. In 1993, it was worn as the "national costume" of the United States for the APEC meeting held in Seattle, Washington. In the early 2000s, the jacket was popular casual wear in hip-hop fashion. The jacket has also caught on with several police departments across the United States for its sturdy design and heavy insulation. It was videly popularized in the 1970s and 90s by Neo-Nazi supporters and groups, especially skinheads. The jacket has had a resurgence in popularity during the 2010's in street fashion, and is a notable staple of celebrities such as Kanye West.