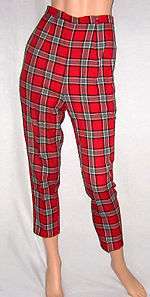 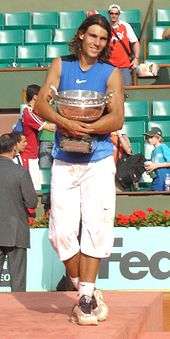 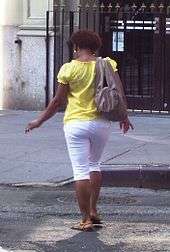 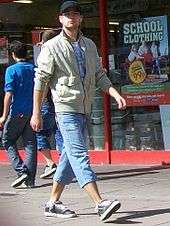 Capri pants (also known as Three quarter pants, capris, crop pants, pedal pushers,[1] clam-diggers,[2] flood pants, jams, highwaters, culottes, or toreador pants[3]) are pants that are longer than shorts but are not as long as trousers. They typically come down to between knee and calf or ankle length. Capris are widely popular with people in many countries; especially in the United States, Europe, Latin America, and Asia.

Capri pants were introduced by fashion designer Sonja de Lennart in 1948. The pants' name derives from the Italian isle of Capri, where they rose to popularity in the late 1950s and early '60s.[4] The American actress Grace Kelly was among the first movie stars who wore capris on the island.

Capris' acceptance in the United States was influenced by the 1960s television series The Dick Van Dyke Show. The character Laura Petrie, the young housewife played by Mary Tyler Moore, caused a fashion sensation – and some mild controversy – by wearing snug-fitting capri pants during the show's run.[5] By the mid 1960s, capri-style tight-fitting cargo pants became popular among teenage boys; a good example was the superstar teen actor of that era, Luke Halpin, who wore them in some episodes of the popular Flipper (1964 TV series). After a drop in popularity during the 1970s through the 1990s, capris returned to favor in the late 1990s.[6] Spanish tennis player Rafael Nadal wore capri pants in the majority of his matches before 2009.[7]