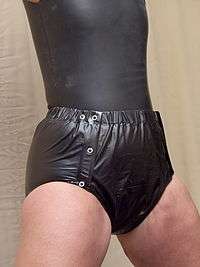 Plastic pants (also known as waterproof pants, plastic panties, diaper covers, nappy covers, or pilchers) are devices worn over a diaper for the purpose of containing liquid or solid waste that may otherwise leak through the fabric. Today, "plastic pants" are usually made out of polyvinyl chloride (PVC) or polyurethane (PU), though, in some instances, latex rubber is still used. Latex rubber has significant drawbacks in these applications: it is easily damaged by rough handling and by oils, creams, and ointments; it does not allow air to ventilate; it also makes a characteristic rustling noise when moved, which limits its use in situations where discretion is necessary.

The availability of inexpensive, and easily worked, man-made waterproof materials since the 1950s has significantly improved the quality of life of those with continence problems, and has contributed to changes in clothing style and freedom, especially for infants and menstruating women.

At the turn of the 20th century, oiled silk was used as a waterproofing medium in adult clothing, but not until latex rubber was commercially available from the 1920s did the idea of wearing a protective garment became commonplace. Ladies panties were worn with a waterproof latex crotch insert or a waterproof panel in the back of an underskirt, to make coping with heavy periods easier and socially safer. The original diaper covers were made from oiled wool, which was naturally waterproof. Newly available latex pants for covering diapers reduced the difficulties in caring for young children on long journeys, on special social occasions, and overnight.

During the 1950s, plastics, mainly PVC, replaced latex on account of their lower cost, ease of maintenance, and lack of noise when handled. However, the history of these garments has influenced their modern names: “Rubber pants” and “Rubbers” are used commonly to mean waterproof pants of all kinds, even though they are typically now made of plastic rather than latex.

The invention of superabsorbent polymers (for diapers and incontinence pads), and of blood-gelling polymers (for sanitary pads) largely displaced traditional cloth diapers and pads. Not only were these modern absorbent materials lighter and less bulky, but they became available as an “all-in-one” solution with its own integral waterproof plastic backing. This eliminated the need for separate waterproof underwear in many situations. Nevertheless, waterproof pants are still used as a second line of defense where absolute protection from leakage is crucial.

The development of plastic pants contributed significantly to juvenile fashion. Until the late 1950s, infants of both sexes usually wore short dresses until they were ready for toilet training – thus avoiding the risks to clothing and hygiene of having top clothes in prolonged close contact with a damp or soiled diaper. Effective and easily obtainable waterproofing – whether integral with the pad or as separate pants – safely allowed a child to be dressed in trousers. The development of disposable diapers made the fit of clothing even neater as much of the bulk of cloth diapers was gone.