For other uses, see Brief (disambiguation). 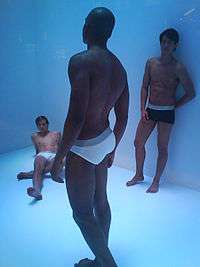 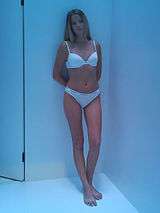 A female in lingerie

Briefs are a type of short, snug underwear and swimwear, as opposed to styles where looser material extends down the thighs.

Briefs have various different styles and are worn by both men and women. See swim briefs for the case of briefs as swimwear.[1][2]

Briefs were first sold on January 19, 1935, by Coopers, Inc., in Chicago, Illinois, at Marshall Field's department store. They dubbed the new undergarment the "Jockey" because it offered a similar degree of support as the jockstrap (one style of which is also called jock brief or support briefs). The designer of the new style was reportedly inspired by a postcard he had received from a friend visiting the French Riviera depicting a man in a very short, form-fitting bathing suit. Thirty thousand pairs were sold within three months of their introduction.[3]

In the UK, briefs were first sold in 1938.[6] Soon, shops were selling 3,000 briefs per week. They were so popular that in 1948, every member of the British Olympic team was given a free pair of briefs.

In Britain, the term "jockeys" has not caught on and briefs are often referred to as "Y-fronts". The term derives from the genericized trademark "Y-Front", property of Jockey International.[7] It in turn derives from the inverted Y-shape formed by the seams at the front of the underpants. The colloquialism is used even when the fly opening may differ in style, and not actually form the shape of the inverted letter "Y" fly on Coopers Jockey brand briefs.

In Australia, briefs are referred to as "jocks" but should not be confused with jockstraps (more specifically used by athletes) which expose the buttocks. Australians generally use the word briefs to refer to the bikini-style underwear for men, which do not have the Y-front opening.

Since the ending of the 20th century, a hybrid called boxer briefs has become popular. Like boxers, they have short legs, but like briefs, they are made of elastic, snug-fitting material. A shorter version of boxer briefs are called trunks.

Traditional size briefs for both sexes cover the upper part of the thigh and extend upward up to (or cover, depending on the design) the navel. This style is often referred to as "full rise" or "full cut". There are also "low rise" and "mid rise" styles whose measurements vary between manufacturers.

Men's briefs often feature a fly — a covered opening on the front of the garment which allows for convenience in urinating. There are several different fly designs in common use, including the standard vertical fly, the horizontal fly, the y-front fly, and others. The use of a fly is optional, and many styles do not utilize a fly at all.

In the case of men's underwear, briefs, unlike boxer shorts, hold the wearer's genitals in a relatively fixed position, which make briefs a popular underwear choice for men who are participating in athletic activities or who feel they need more support than loose-fitting underwear can provide. In addition, boxers often ride up the body when the wearer is running. There are variations on the brief with different cuts, some offering a wider leg and others a narrower leg, names including, midi, full, sport, active, mini, bikini. Some briefs have the cut all the way to only the waistband on the side, called a tanga brief.

Briefs also refers to a style of women's and girls' panties that is typically cut with a high waist to provide full coverage of the hips and buttocks. A control brief is a kind of high-waisted panty girdle. French-cut or high-cut briefs expose more of the front part of the thigh, while boy briefs have short legs, similar to men's boxer briefs, often combined with a lower waist.

Briefs is also the name given to costumed outerwear worn by female dancers and athletes in sports such as cheerleading, figure skating, and tennis. These briefs are typically worn under a short skirt; they may be attached to the skirt or dress body, or a separate garment ("cheer briefs").

Tight briefs have been blamed for negatively affecting semen analysis, since they may interfere with the cooling of the testes.[8] However, not all research has come to the same conclusion. A study in the October 1998 Journal of Urology, for example, concluded that underwear type is unlikely to have a significant effect on male fertility.[9]