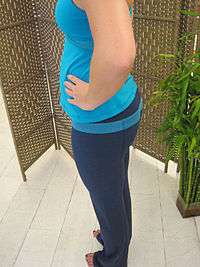 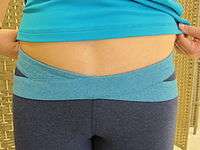 Yoga pants are a type of flexible, form-fitting pants designed for the practice of yoga as well as other physical activities that involve a lot of movement, bending and stretching. They are typically worn for sports and physical exercise, martial arts, dancing, pilates, or aerobics. These pants are generally made from a blend of cotton, lycra spandex, nylon, polyester, wool, or a similarly light and stretchy synthetic material giving the pants a very soft, smooth, polished and silky finish when worn.[1][2] Although designed specifically for yoga, the pants are also casually worn as everyday dress by many women.[2][3][4][5][6][7][8] 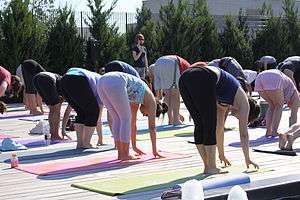 Yoga pants are commonly used in activities involving physical exercise, such as yoga.

According to Anu Hastings with the product database Indix, over 2,700 types of so-called "yoga pants" are now available on the market.[9]

There are various types and styles, including the traditional boot-cut and flared yoga pants with flat waistbands.[10] The typical type of yoga pants traditionally come in black, are tight-fitted, boot-cut, and flared style, are reversible, carry a four way stretch fabric and have a flat elastic waistband folded over at the top. The traditional boot-cut and flared yoga pants with waistbands are the most well-known and most popular type, generally used for casual wear, active wear, lounge wear, maternity wear, dancewear, or clubwear.[11][12][13][14][15][16] They are tight-fitted, giving them flexibility and comfort as well as the moisture-wicking fabrics within the pants move perspiration away from the body to the fabric's outer surface where it can evaporate giving the pants an advantage when worn during physical activities that exert heavy perspiration keeping the wearer cool and comfortable.[17] The flat and fold-over waists are utilized to provide flexibility, comfort, coverage, style, breathability and versatility. Flat and fold-over waist boot cut and flare yoga pants are commonly used as casual wear, workout and exercise wear, maternity wear, making errands, lounging around the house, yoga class, or as clubwear as women would wear the body-hugging pants to permit freedom of movement when dancing during nights out at their local nightclub.[18][19][20][21] Typically, the more spandex contained in the yoga pants, the more likely they are to be used as exercise wear. The more cotton fabrics are more commonly used for loungewear.[22][23]

There are various types and styles of yoga pants in addition to the traditional.[24][25][26][27] The flared yoga pants are also commonly used as dancewear allowing it to stretch and for the ease of movement it affords. They also typically have combinations of stretchy fabric blends offered by lycra spandex and nylon giving the pants a rich and silky appearance and feel when worn. Crop-fitted yoga pants lie above the ankle (similar to capri pants), and are oftentimes utilized for a more flattering, versatile, and dressier look during warmer times of the year.[28][29] They are used commonly as casual wear, activewear, for making errands, lounging, or as clubwear on a night out.[30][31][32][33][22][23][34] The flared yoga pants are often paired with flip-flops, running shoes, flats, or Ugg boots, with hoodies or wraps paired and a tank top or shirt tucked underneath.[35][36][37][38][39] Due to their high elasticity, yoga pants are comfortable enough to be worn during many different occasions. Yoga pants were originally created for use practicing yoga but over the years, due to their increased popularity, they have developed into an everday mainstream clothing item that can be found in classrooms, gymnasiums, restaurants, shopping malls all to way to the dance floors of nightclubs.[40][30][31][32][33][41][42][43]

Demand for comfortable active, athletic, sports and casual wear has increased since the turn of the 21st century.[44] Nike, Inc. reported their women’s business comprised 7 billion in 2010[45] and the larger market grew to $33.6 billion by 2015.[46] Nike claims the driving factor has been by the demand for fashionable workout gear that is also flattering. New colors, patterns, and structural design of yoga pants created more versatility and increased their wear in public settings. Author Mae Anderson described the new craze of yoga pants outside the gym by calling them the "new jeans."[45]

Many high-end fashion houses to mass-market trend-chasers have been capitalizing on the growth of the modern sportswear market leading an emphasis on technical fabrics and garments that have made yoga pants to be worn as everyday dress by many women. Market research analysts have sought to explain the trend by referencing the extension of work hours in major cities across North America, leading to a “day-to-night” than a “gym-to-work” one while other explanations cite the North American passion for fitness and healthy living.[47]

In the United States, reaction to the wider adoption of yoga pants proved somewhat controversial for schools.[48] Some schools adopted dress codes banning yoga pants for all students, or banning them only for female students.[49][50][51] Bitch Magazine argued such bans are largely gendered, focusing on the damage caused by "distraction" by girls;[52] similar complaints caused a ban in Rockport, Massachusetts to be quickly reversed.[49]

There are others who agree with the banning of yoga pants in public. Most often the reasoning for disagreeing with wearing yoga pants publicly is that they promote a relaxed and informal atmosphere. Amanda Hallay, professor of fashion and cultural history at New York City’s LIM College, was interviewed for her opinion on yoga pants being a replacement for jeans. She stated, “Yoga pants are a step above pajamas and we don't wear pajamas out to lunch, and we certainly don't wear them to work. Pajamas are for sleeping in, and ergo, not appropriate to wear in any other setting. The same can be said for yoga pants. Yoga pants are to be worn while doing yoga." Yoga pants being worn in public can be perceived as inappropriate and unattractive. According to Hallay, to promote a more business-like or mature persona, a person should dress as such.[53]

Major yogawear brands include Victoria's Secret, TNA Aritzia, Hard Tail, Athleta, Lucy Activewear, Lululemon Athletica, and Prana.[54][55] All of these brands feature the traditional boot-cut flare yoga pants style as well as other different styles which include capris, crops, and leggings. The yoga pants traditionally come in black but have since have become available with a multitude of other colors such as navy, white, pink, blue, brown, and charcoal.[56]