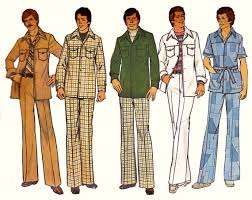 A Simplicity Sewing pattern for the Safari Suit from the 1970s.

A safari jacket or bush jacket is a garment originally designed for the purpose of going on safari in the African bush. When paired with trousers or shorts, it becomes a safari suit.[1] A safari jacket is commonly a lightweight cotton drill or lighter poplin jacket, traditionally khaki in color, with a self-belt, often with epaulette style shoulder straps called passants, with four or more expandable bellows pockets.

The earliest reference to a 'safari suit' listed in the The Oxford English Dictionary[3] is from an American newspaper in 1935. In 1936, author and adventurer Ernest Hemingway designed a 'bush jacket' which was made by Willis & Geiger. In 1939, Abercrombie & Fitch advertised safari jackets, shorts and trousers, of 'coat shirt style' for sports and leisure wear.[4]

In the 1960s and 1970s safari suits became fashionable thanks to designers versions for men and women by, for example, French designers Ted Lapidus and Yves Saint Laurent, both of whom are among those credited with inventing and popularising the look.[5][6] 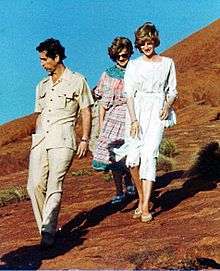 The safari suit is popularly associated with Australian fashion in the 1970s. It was commonly worn by the former South Australian Premier Don Dunstan.[7]

Honourable members, I have received a further request that the standard of male dress be relaxed to include safari jackets. I have been in touch with the federal parliament and I find that the Speaker, Sir Billy Snedden, is allowing safari jackets with shirt and tie. He also allows one member to wear a safari jacket over an open-necked shirt. Therefore, I have decided to accept safari jackets as suitable dress in the Assembly. I must say that I do this very reluctantly because I feel that we have relaxed our standards too far. However, the precedent has been set. I might add that I will not allow T-shirts.

Charles, Prince of Wales famously wore a safari suit on his visit to Uluru with Diana, Princess of Wales in 1983.

In India, the safari suit gained popularity through the 1970s influenced to a large degree by films (James Bond/Roger Moore) and some fashions trends from the west for warmer climates. The safari suit in India gained prominence when local synthetic fibre manufacture and supply was significantly increased in the later half of the 1970s.

Reliance Industries and other textile manufactures set up synthetic fibre plants in India significantly reducing the price of synthetic fibre and the Indian middle class jumped at the opportunity to be well dressed in a fabric which though unsuited to India's climate was fairly cheap, easy to maintain and long-lasting.[8] The safari suit continued to be the de facto business attire, particularly in government/public sectors and the SMB arena in India, through the late-1990s. With India's growth over the 1990s, liberalization and with the middle class suddenly having more disposable income, the younger generations began to gravitate towards more modern western fashions such as suits and other business attire. Although it is still visible in some parts of India, the Safari suit is now indelibly associated with the so-called License Raj - the slow, inefficient Indian bureaucracy of the 1970s and the 1980s.

Roger Moore's James Bond wore beige safari jackets or bush shirts with matching pants in The Man with the Golden Gun, Moonraker and Octopussy. The safari jacket was a favourite of J. R. Ewing in the 1980s evening soap opera Dallas[9] where he usually wore it with an ascot. The Marvel Comics superhero Wonder Man wore a red safari jacket with black pants as his costume for a period of time. In the J.G. Ballard novel High Rise, the character Anthony Royal wears a white safari jacket.