For a Boleslaw Prus novel, see The Waistcoat. 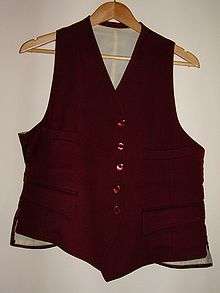 A traditional waistcoat, to be worn with a two-piece suit or separate jacket and trousers.

A waistcoat (/ˈwɛskət/ or /ˈweɪstkoʊt/; often called a vest in American English, and colloquially a weskit) is a sleeveless upper-body garment. It is usually worn over a dress shirt and necktie and below a coat as a part of most men's formal wear. It is also sported as the third piece in the traditional three-piece male business suit.[1] 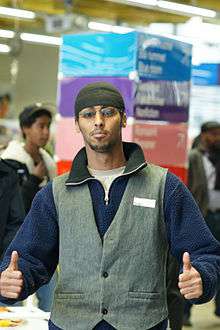 A waistcoat has a full vertical opening in the front, which fastens with buttons or snaps. Both single-breasted and double-breasted waistcoats exist, regardless of the formality of dress, but single-breasted ones are more common. In a three piece suit, the cloth used matches the jacket and trousers. Waistcoats can also have lapels or revers depending on the style.

Before wristwatches became popular, gentlemen kept their pocket watches in the front waistcoat pocket, with the watch on a watch chain threaded through a buttonhole. Sometimes an extra hole was made in line with the buttonholes for this use. A bar on the end of the chain held it in place to catch the chain if it were dropped or pulled. Waistcoats are now worn less, so the pocket watch may more likely be stored in a trouser pocket.

Wearing a belt with a waistcoat, and indeed any suit, is not traditional. To give a more comfortable hang to the trousers, the waistcoat instead covers a pair of braces (suspenders in the U.S.) underneath it.

A custom still sometimes practised is to leave the bottom button undone. This is said to have been started by King Edward VII (then the Prince of Wales), whose expanding waistline required it. Variations on this include that he forgot to fasten the lower button when dressing and this was copied. It has also been suggested that the practice originated to prevent the waistcoat riding up when on horseback. Undoing the bottom button avoids stress to the bottom button when sitting down; when it is fastened, the bottom of the waistcoat pulls sideways causing wrinkling and bulging, since modern waistcoats are cut lower than old ones. This convention only applies to single-breasted day waistcoats and not double breasted, evening, straight-hem or livery waistcoats that are all fully buttoned. 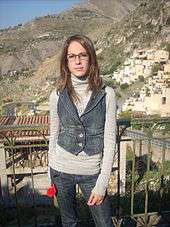 Woman in a modern denim waistcoat.

Waistcoats worn with lounge suits (now principally single-breasted) normally match the suit in cloth, and have four to six buttons. Double breasted waistcoats are rare compared to single. As formalwear, it used to be common to wear a contrastingly coloured waistcoat, such as in buff or dove linen. This is still seen in morning dress, which requires a waistcoat.

The waistcoats worn with white- and black- tie are different from standard daytime single-breasted waistcoats, being much lower in cut (with three buttons or four buttons, where all are fastened). The much larger expanse of shirt compared to a daytime waistcoat allows more variety of form, with "U" or "V" shapes possible, and there is large choice of outlines for the tips, ranging from pointed to flat or rounded. The colour normally matches the tie, so only black barathea wool, grosgrain or satin and white marcella, grosgrain or satin are worn, although white waistcoats used to be worn with black tie in early forms of the dress.

Waiters, sometimes also waitresses, and other people working at white-tie events, to distinguish themselves from guests, sometimes wear gray tie, which consists of the dress coat of white tie (a squarely cut away tailcoat) with the black waistcoat and tie of black tie.

The variant of the clergy cassock may be cut as a vest. It differs in style from other waistcoats in that the garment buttons to the neck and has an opening that displays the clerical collar.

In the Church of England, a particular High Church clerical vest introduced in the 1830s was nicknamed the "M.B. Waistcoat" with "M.B." standing for the Mark of the Beast.[2]

In the Girl Scouts of the USA, vests are used as an alternative to the sash for the display of badges.

In many stock exchanges, traders who engage in open outcry may wear colored sleeveless waistcoats, or trading jackets, with insignia on the back.

The waistcoat is one of the few articles of clothing whose origin historians can date precisely. King Charles II of England, Scotland and Ireland introduced the waistcoat as a part of correct dress after the Restoration of the British monarchy in 1660. It was derived from the Persian vests seen by English visitors to the court of Shah Abbas. The most famous of these was Persia's Ambassador to the Court of St James's, Sir Robert Shirley. He was an Englishman who had been a traveller in Persia for years.

John Evelyn wrote about waistcoats on October 18, 1666: "To Court, it being the first time his Majesty put himself solemnly into the Eastern fashion of vest, changing doublet, stiff collar, bands and cloak, into a comely dress after the Persian mode, with girdles or straps, and shoestrings and garters into buckles... resolving never to alter it, and to leave the French mode".

Samuel Pepys, the diarist and civil servant, wrote in October 1666 that "the King hath yesterday in council declared his resolution of setting a fashion for clothes which he will never alter. It will be a vest, I know not well how". This royal decree provided the first mention of the waistcoat. Pepys records "vest" as the original term; the word "waistcoat" derives from the cutting of the coat at waist-level, since at the time of the coining, tailors cut men's formal coats well below the waist (see dress coat). An alternative theory is that, as material was left over from the tailoring of a two-piece suit, it was fashioned into a "waste-coat" to avoid that material being wasted, although recent academic debate has cast doubt on this theory.

During the seventeenth century, troops of the regular army – and to some degree also local militia – wore waistcoats which were the reverse colour of their overcoats. It is believed that these were made by turning old worn-out standard issue overcoats inside-out (so that the lining colour appeared on the outside) and removing the sleeves. The term "waistcoat" might therefore also be derived from the wastage of the old coat.

During the seventeenth and eighteenth centuries, men often wore elaborate and brightly-coloured waistcoats, until changing fashions in the nineteenth century narrowed this to a more restricted palette, and the development of lounge suits began the period of matching informal waistcoats.

After the French Revolution of 1789, anti-aristocratic sentiment in France (and elsewhere in Europe) influenced the wardrobes of both men and women, and waistcoats followed, becoming much less elaborate. After about 1810 the fit of the waistcoat became shorter and tighter, becoming much more secondary to the frock-coat overcoat and almost counting as an undergarment, although its popularity was larger than ever. With the new dandyism of the early 19th century, the waistcoat started to change roles, moving away from its function as the centrepiece of the visual aspect of male clothing, towards serving as a foundation garment, often with figure-enhancing abilities.

From the 1820s onwards, elite gentlemen—at least those among the more fashionable circles, especially the younger set and the military—wore corsets. The waistcoat served to emphasize the new popularity of the cinched-in waist for males, and became skin-tight, with the overcoat cut to emphasize the figure: broader shoulders, a pouting chest, and a nipped-in waist. Without a corset, a man's waistcoat often had whalebone stiffeners and were laced in the back, with reinforced buttons up the front, so that one could pull the lacings in tight to mould the waist into the fashionable silhouette. Prince Albert, husband of Queen Victoria, had a reputation for his tight corsets and tiny waist; and although he lacked popularity during his early reign, men followed his style, and waistcoats became even more restrictive.

This fashion remained throughout the 19th century, although after about 1850 the style changed from that of a corseted look to a straighter line, with less restriction at the waist, so that the waistcoat followed a straighter line up the torso. Toward the end of the century, the Edwardian look made a larger physique more popular—Edward VII having a large figure.

Waistcoats have also become popular within the indie and steampunk counter-culture movements in the United States.[3] Vests are often worn both open or closed over dress shirts and even t-shirts.

Although not related to formal wear, a type of waistcoat have also been used as part of workers uniforms, such as at Walmart prior to 2007,[4] and also as high visibility clothing (usually bright "safety orange" color).