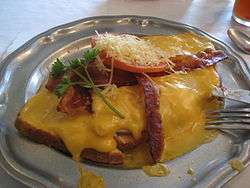 The Hot Brown was first served in Louisville's Brown Hotel

The Cuisine of Kentucky mostly resembles that of traditional Southern cuisine. Some common dinner dishes are fried catfish and hushpuppies, fried chicken and country fried steak. These are usually served with vegetables such as green beans, greens, pinto beans (or "soup beans") slowed cooked with pork as seasoning and served with cornbread. Some other popular items would include fried green tomatoes, cheese grits, corn pudding, fried okra, and chicken and dumplin's, which can be found across the commonwealth.[1][2][3] In addition to this, Kentucky is known for its own regional style of barbecue.[4] This style of barbecue is unique in itself given that it uses mutton, and is a style of Southern barbecue unique to Kentucky.[5] Although Kentucky's cuisine is generally very similar to that of traditional Southern cuisine, it does differ with some unique dishes, especially in Louisville where the Hot Brown and Derby pie originated, although Derby pie is somewhat similar to pecan pie, which is standard among traditional Southern cuisine.[6][7]

In northwestern parts of Kentucky burgoo is a favorite, while in southwestern parts of the state regular chili con carne is typical staple. In northern Kentucky plus a smaller amount in Louisville and Lexington Cincinnati chili is a popular fast food. That region and the Louisville area also are both home to a pronounced German-American population, translating into northern-like preferences for beer and European sausages. However, the remainder of the state's cuisine tends to be thoroughly Southern, preferring breakfast meats like country ham, ground pork sausage and as their beverage of choice, the state's renowned bourbon whiskey. Some common desserts would be chess pie, pecan pie, blackberry cobbler and bread pudding. 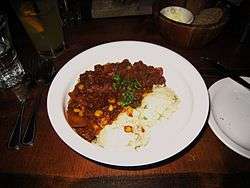 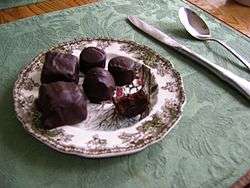 See also: Barbecue in the United States and Pit barbecue

The Ohio River region of western Kentucky, namely Daviess, Henderson and Union counties (the area centering on Owensboro and Henderson) has developed a unique style of pit barbecue, featuring a heavy dose of vinegar-based sauces, often served with pickles, onions, potato salad and coleslaw. The three main meats used are chicken, pork and mutton, but beef is not unheard of. Burgoo is a main specialty, with no two burgoo recipes being the same. Owensboro is home to the International Bar-B-Q Festival, which is a sanctioned barbecue competition.

Farther to the west, in the Purchase area, pit barbecue is primarily pork shoulder, with the unmodified word "barbecue" referring specifically to that meat. The other meats used in the Owensboro–Henderson area are generally available as well. Sauces are essentially identical in the two regions.