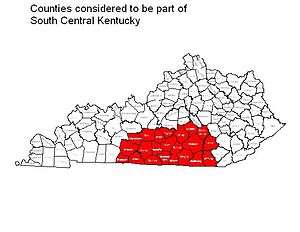 South Central Kentucky is a cultural region of 22 Kentucky counties located roughly between I-65 in the Bowling Green area and I-75 around the London area, but within three counties of the Tennessee border and south of the "Golden Triangle" (the areas around Louisville, Lexington, and Northern Kentucky). In 2005, South Central Kentucky had an estimated population of 562,883, an increase of 25,262 over the 2000 total. By 2010, it is projected to have a population of 588,145; an increase of 8.6% over its 2000 population of 537,621.

The region is basically defined as being more culturally southern than the triangle, but less isolated from the state's major urban areas than Eastern or Western Kentucky. It is also the only part of Kentucky outside the Golden Triangle to be experiencing large population growth, with 11 of its 22 counties growing from 2.4% to 6.2% between 2000 and 2004. Only three Kentucky counties outside either the Golden Triangle or S.C. grew by more than 2.4% during that four-year period. The area is also home to five of Kentucky's largest lakes, making the area a popular resort and retirement area.

Several major North - South routes were improved during the 1990s, helping to connect the region with the major cities of the Bluegrass and Ohio, besides Interstates 65 and 75, and providing routes to popular tourist attractions like Lake Cumberland. These roads south of the Cumberland Parkway have not been improved and thus access with northern Tennessee is limited.

This is the main route to Burnside state park and eastern parts of Lake Cumberland. KY route 461 also provides easy access to I-75 The road is slated to be widened in Pulaski County within several years.

This road was widened mostly because of former Governor and Casey County native Wallace Wilkinson. In recent years the length of the road from Danville to Jamestown has been burgeoning with new gas stations and restaurants, especially in western Lincoln County.

This is the main route for Louisville area traffic to get to Lake Cumberland.

There are currently plans to build either a limited access parkway or regular four lane road from the Cumberland Parkway at Columbia to Bluegrass Parkway north of Springfield, or possibly farther north to Shelbyville or even I-71 near Carrollton.