The Lexington–Fayette Metropolitan Statistical Area is the 106th-largest Metropolitan Statistical Area (MSA) in the United States. It was originally formed by the United States Census Bureau in 1950 and consisted solely of Fayette County until 1980 when surrounding counties saw increases in their population densities and the number of their residents employed within Lexington–Fayette, which led to them meeting Census criteria to be added to the MSA. 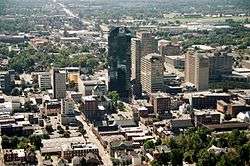 Lexington is the Principal City of the metropolitan area

• Populations are based on published estimates by the United States Bureau of the Census.

¹County was not a part of Lexington–Fayette MSA at the time of this Census and the county's population is not included in MSA total.