The Music of Kentucky is heavily centered on Appalachian folk music and its descendants, especially in eastern Kentucky. Bluegrass music is of particular regional importance; Bill Monroe, "the father of bluegrass music", was born in the Ohio County community of Rosine, and he named his band, the Blue Grass Boys, after the bluegrass state, i.e., Kentucky. Travis picking, the influential guitar style, is named after Merle Travis, born and raised in Muhlenberg County. Kentucky is home to the Country Music Highway (Highway 23), which extends from Portsmouth, Ohio to the Virginia border in Pike County.[1] 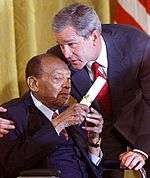 Renfro Valley, Kentucky is home to Renfro Valley Entertainment Center and the Kentucky Music Hall of Fame and is known as "Kentucky's Country Music Capital", a designation given it by the Kentucky State Legislature in the late 1980s. The Renfro Valley Barn Dance was where Renfro Valley's musical heritage began, in 1939, and influential country music luminaries like Red Foley, Homer & Jethro, Lily May Ledford & the Original Coon Creek Girls, Martha Carson, and many others have performed as regular members of the shows there over the years. The Renfro Valley Gatherin' is today America's second oldest continually broadcast radio program of any kind. It is broadcast on local radio station WRVK and a syndicated network of nearly 200 other stations across the United States and Canada every week.

Major music venues in Kentucky include the Paramount Arts Center in Ashland. There is also Sturgill's Music Center in Tom T. Hall's hometown of Olive Hill. Just south of Olive Hill is Sandy Hook, the boyhood home of Keith Whitley, whose house is now a museum, exhibited in conjunction with the annual Tobacco Festival. The Kentucky Opry in Prestonsburg is a major institution, using the Mountain Arts Center. Louisville is home to the West Point Country Opry, while the city of Owensboro is a major bluegrass center, and is home to the International Bluegrass Music Association.[2] In the capital city, Frankfort, there is the Kentucky Coffeetree Cafe. The cafe is a very intimate venue that features some of the top national and regional Bluegrass, American and Folk artists. The Rosemary Clooney House in Augusta pays homage to the life and career of this favorite daughter of Maysville. 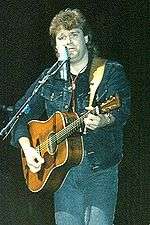 Singers gather annually at Benton on the fourth Sunday in May to sing from a shape note hymn and tune book called The Southern Harmony, and Musical Companion. This event, first organized in 1884 and called The Big Singing or Big Singing Day, is considered by many to be the oldest indigenous musical tradition in the United States. It was organized by James Roberts Lemon, a newspaper owner and publisher in western Kentucky.

Ashland is also home to the Summer Motion festival and Poage Landing Days, while Olive Hill also hosts the International Strange Music Weekend and the Shriner's Bluegrass Festival. The Renfro Valley Barn Dance has been held in Renfro Valley since 1939. Owensboro has ROMP (River Of Music Party) the last part of June every year. Other festivals include the Forkland Heritage Festival and Revue in Gravel Switch.[2]

Lexington is host to the oldest bluegrass music festival in the state. The Festival of the Bluegrass is held every June at the Kentucky Horse Park and considered one of the premier traditional bluegrass festivals in the country.

Wilmore, Kentucky is home to the Ichthus Music Festival. Ichthus is a Christian music festival held each year on the Ichthus Farm. Notable bands such as Switchfoot, Relient K, Pillar, and P.O.D. have all played at past Ichthus festivals.

Mount Sterling is home to the Gateway Music Festival.

Boomslang: A Celebration of Sound & Art is an annual multi-venue music festival in Lexington, sponsored by the University of Kentucky's college radio station, WRFL. The festival is an extension of WRFL's mission to provide a platform for non-mainstream, non-commercial music and other programming not found elsewhere in the region, featuring a variety of artists from both the region and from around the world. Genres tend to be experimental in nature, but have included everything from alternative rock, post-rock, electronic, hip hop, punk rock, metal, and psychedelic rock bands. Other festival features have included dance performances, local craft booths, fashion and art installations, workshops, literary events and film screenings, with a special focus on the artists and arts organizers that make Lexington unique.

In the 1830s, a Great Awakening of fervent Christianity began, leading to popular spiritual song traditions. During this period, the country was undergoing a religious revival that was centered on itinerant preachers called circuit riders, and outdoor worship gatherings (camp meetings) where hymns (camp songs) were sung. Earlier in the century, the first camp meeting was held in July 1800 in Logan County. In 1801, a meeting in Cane Ridge in Bourbon County lasted for six days and attracted ten to twenty thousand people.[3]

In 1916, Loraine Wyman and Howard Brockway collected Kentucky folk music which they published in two folios:

Louisville is known for producing some of the earliest jug band music.