Bullitt County is a county in the U.S. state of Kentucky located in the far western Bluegrass region known as the Knobs. As of the 2010 census, the population was 74,319.[1] The county seat is Shepherdsville.[2] The county was founded in 1796.[3]

The western fifth of the county (40,000 acres (160 km2)) is part of the United States Army post of Fort Knox and is reserved for military training.[4]

The first inhabitants of the land that would become Bullitt County were the Paleo-Indians who entered North America approximately 11,500 to 10,000 years BP. These people, whose ancestors can be traced back to Eastern and Central Asia, were nomadic. They were hunters and gatherers whose remains have been discovered near the area's mineral springs or salt licks, where big game such as the mammoth, bison and ground sloth once gathered. Native Americans were their descendants, including the Shawnee people, who probably considered this region part of their homeland and certainly valued it as a hunting ground. [5] [6]

Both France and Britain had traders and colonists who encountered the Shawnee. European colonization of the Americas led to competing claims between those nations to the lands west of the Appalachians and east of the Mississippi River. After suffering defeat by Great Britain in the Seven Years' War (known as the French and Indian War in its North American front), France ceded control in 1763 of its claimed territories.

For thousands of years before the county's formation, nutrient-rich salt licks attracted large herds of bison and other game to the area. Native American tribes made it their hunting grounds, as did the 18th century longhunter. In 1773, after the French and Indian War, the Virginia governor sent Captain Thomas Bullitt (uncle to Alexander Scott Bullitt) into the area to survey for land grants. The most historic of the county's salt licks, Bullitt's Lick, is named after him. As the Revolutionary War led to widespread salt shortages, the Lick became the site of Kentucky's first industry, attracting many settlers to the area.[7][8]

Colonial veterans of the war were promised land in what was later called Kentucky. Bullitt's Lick became an important saltwork to the region; its salt was harvested and sent by pack train and flatboat as far off as Illinois to the west. The Bullitt's Lick saltwork was Kentucky's first industry and in production until around 1830. By that time, the steamboat and importing of salt brought access to less expensive sources.

The first settlement of the area was also the first station on the Wilderness Road between Harrodsburg and the Falls of the Ohio. It was a fort called Brashear's Station or the Salt River Garrison, built in 1779 at the mouth of Floyd's Fork. Most of the county was settled after the American Revolutionary War. Shepherdsville, named after Adam Shepherd, a prosperous business man who purchased the land near the Falls of Salt River in 1793, is the oldest town and became the county seat.

In December 1796[3] the county of Bullitt, named after Thomas Bullitt's nephew and Kentucky's first Lieutenant Governor Alexander Scott Bullitt,[9] was organized from land taken from Jefferson and Nelson counties through an act approved on December 13, 1796 by the Kentucky General Assembly. In 1811, the northwestern area of the county expanded to include land given by Jefferson County. In 1824, an eastern area of the county was given to help form Spencer County.[10] 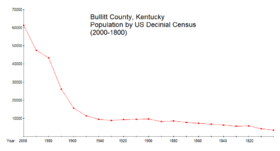 There are several police agencies in Bullitt County. The primary law enforcement agency in the county is the Bullitt County Sheriff.[18] The current sheriff of Bullitt County is Dave Greenwell. The Sheriff's Office is an elected position and is staffed by 34 deputy sheriffs, and four office staff. There are also 9 deputies and court certified security officers who provide courthouse security. The Sheriff's Office provides patrol, crime prevention, criminal investigation; and all other police related functions in the county. The primary areas for the sheriff's patrol division are the unincorporated areas in Bullitt County they also provide backup for the various city police agencies. Since 1989 the Sheriff's Office has been contracted by the County Fiscal Court to provide the county police force to the citizens of Bullitt County after the County Police Department was folded. The County Sheriff's Office has deputies assigned to the drug task force, arson task force, accident reconstruction team, rapid response team, technical operations, ATV squad, boat patrol, hostage negotiations, and an incident command team. Most of the services are provided while on duty or for free by special deputies who serve their county for free, even paying for their own equipment, uniforms, and sidearm.

The Bullitt County Emergency Medical Service (BCEMS) provides all emergency medical care and transport in Bullitt County. BCEMS is a division of Bullitt County Fiscal Court and authorized and funded by the county through taxes.

Bullitt County, which is bisected by I-65, the main north-south transportation corridor, has grown into a thriving distribution hub, and several of its major business parks are approximately 16 miles (26 km) from Louisville International Airport and UPS' global air-freight hub Worldport. More than 6,000,000 square feet (560,000 m2) of distribution, warehousing and other complexes have been built and absorbed in Bullitt County since 2000, and additional construction is ongoing.

In October 2011, Zappos, which already is Bullitt County's largest employer, with more than 2,300 full-time workers, was reported to have plans to add 5,000 more employees in the next three years. The company has also outgrown the more than 1 million square feet of processing space it operates in Bullitt County and plans to build a 1.2 million-square-foot facility next year to keep pace with its rapid growth. [19]

There are six middle schools:

There are four high schools:

Although large-scale residential development has not made its way south of Shepherdsville, the growth is apparent in and around that town and in Mount Washington, as well as points north along I-65 towards Hillview. Both Shepherdsville and Mount Washington have stretched their boundaries such that they are nearly touching each other. The 10-mile (16 km) stretch of Kentucky 44 that connects the two towns has homes through nearly the entire expanse.