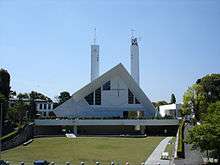 Yamaguchi (山口市, Yamaguchi-shi) is the capital city of Yamaguchi Prefecture, Japan. The city was founded on April 10, 1929.

Yamaguchi has claim to two famous religious sites: the Buddhist temple, Rurikō-ji (瑠璃光寺, Rurikō-ji), with its five-story pagoda, and the Roman Catholic cathedral connected with Saint Francis Xavier whose work was responsible for the introduction of Christianity to Japan in 1550.

Yamaguchi is served by Yamaguchi Ube Airport in nearby Ube.

Yamaguchi has a humid subtropical climate (Köppen climate classification Cfa) with hot summers and cool winters. Precipitation is significant throughout the year, but is much higher in summer than in winter.