Shimonoseki (下関市, Shimonoseki-shi) is a city located in Yamaguchi Prefecture, Japan. It is at the southwestern tip of Honshu, facing the Tsushima Strait and also Kitakyushu across the Kanmon Straits.

Nicknamed the "Fugu Capital," it is known for the locally caught pufferfish and is the largest harvester of the pufferfish in Japan. 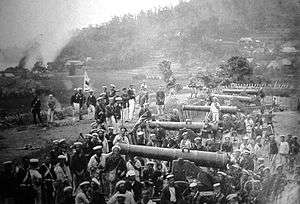 The Heike and Genji fought at Dan-no-ura near the present Kanmonkyo Bridge.

On February 13, 2005, Shimonoseki absorbed the towns of Hōhoku, Kikugawa, Toyota and Toyoura (all from Toyoura District) to create the new and expanded city of Shimonseki. Since October 1, 2005, the city has been designated as a core city by the Japanese Government.

The geographical position of Shimonoseki has given it historical importance, especially with the Bombardment of Shimonoseki in 1864 and the Treaty of Shimonoseki, where a defeated China handed over Taiwan, Penghu, and Port Arthur to the victorious Japanese in 1895.

An Imperial decree in July 1899 established Shimonoseki as an open port for trading with the United States and the United Kingdom.[1] 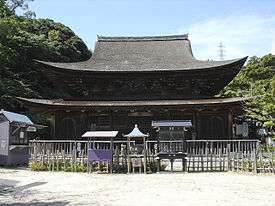 On January 7, 2006, the wooden station building at Shimonoseki station, which had dated back to 1942, was destroyed in a fire, the cause of which is suspected to be arson.

Shimonoseki has a humid subtropical climate (Köppen climate classification Cfa) with hot summers and cool winters. Precipitation is significant throughout the year, but is heavier in summer. 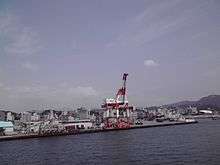 Shimonoseki is served by four airports outside the city. 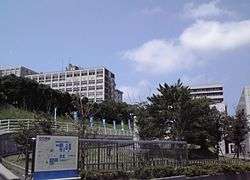 Shimonoseki is home to many festivals that are held throughout the year. Of these, the most famous are Shimonoseki Kaikyo Festival and Shimonoseki Bakan Festival.

Shimonoseki has one Japanese and five international sister cities:[6]