This article is about the city in Japan. For the village in Burkina Faso, see Souka, Burkina Faso. 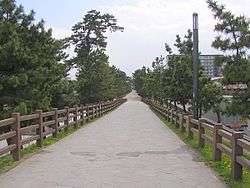 Situated in the southeast corner of Saitama Prefecture approximately 30 kilometers away from Tokyo. Sōka is surrounded to the east by the cities of Yashio, Misato and Yoshikawa, and to the west by Kawaguchi. To the north is Koshigaya and to the south Adachi Ward of Metropolitan Tokyo.

Sōka, once a peaceful agricultural area surrounded by water and greenery, lies in the Nakagawa-ayase basin, an area referred to as the Nakagawa-teichi district. This alluvial plain spreads over the central part of the Kanto Plain. As a result of urbanization, the once abundant greenery and clean water was adversely affected. Now, Sōka is promoting a "town of greenery and water based on history and the natural features of the area". Creation of areas of greenery reflecting the changes of the four seasons, and the restoration of waterways and environs is being advanced.

During the Edo period, Sōka-shuku developed as a post station on the Nikkō Kaidō highway. The town of was Sōka created within Kitaadachi District, Saitama with the establishment of the municipalities system on April 1, 1889. It annexed the neighboring villages of Yatsuka and Shinden on January 1, 1955, followed by the village of Kawayanagi on August 1, 1955. On November 1, 1955, Sōka was elevated to city status. Following this, rapid population expansion and urbanization took hold due to strong economic growth which was fueled by its proximity to Tokyo. The city was proclaimed a tokureishi on April 1, 2004 with increased local autonomy.

Sōka traditionally is known for its rice cracker, the Sōka senbei. However, agriculture and food processing form a minor portion of the local economy, which is heavily industrialized.

Sōka is twinned with: