For the town in Tottori Prefecture, see Kōfu, Tottori.

As of November 1, 2015, the city had an estimated population of 193,127 and a population density of 909 persons per km2. The total area was 212.41 square kilometres (82.01 sq mi). Kōfu's name means "capital of Kai Province". During the Sengoku period, it was famous as the stronghold of Takeda Shingen.

Kōfu is located in north-central Yamanashi Prefecture, extending from the northern border of the prefecture with Nagano Prefecture, south until it almost reaches the southern border of the prefecture. It is narrow along its east-west axis. The city bisects the Kofu Basin, and is at an elevation of between 250 and 300 meters, surrounded by mountains on all sides. Much of the northern portion of the city is within the borders of the Chichibu-Tama-Kai National Park 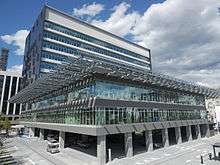 Archaeologists have discovered evidence of human settlement in the Kōfu area dating to the Japanese Paleolithic period, with continuous settlement through the Jomon, Yayoi and Kofun periods. During the Nara period, the provincial temple of Kai Province was established in what is now Kōfu, indicating that the Nara period provincial capital was located nearby, as the name of the city implies. During the Heian period, a branch of the Minamoto clan, the “Kai-Genji” ruled over vast shōen estates, and developed a military force noted for its use of cavalry. By the Muromachi period, a branch of the Kai-Genji, the Takeda clan came to dominate the area, and built a castle in what is now part of Kōfu. Under the rule of Takeda Nobutora, Kōfu was rebuilt as a castle town starting in 1519, and remained the capital of the Takeda clan under Takeda Shingen and his son Takeda Katsuyori. During the Edo period, Kai Province was tenryō territory ruled directly to by the Tokugawa shogunate, and Kōfu Castle remained its administrative center. Following the Meiji restoration, with the establishment of the municipalities system, the town of Kōfu was proclaimed on July 1, 1889. During World War II, much of the city was destroyed by United States Army Air Forces B-29 Superfortress bombers during a major air raid during the night of 6 July 1945.[1]

Kōfu has the typical Honshū humid subtropical climate, though it is less wet than either the south or Sea of Japan coast due to its location in a shielded mountain valley. Temperature ranges are noticeably greater than in coastal regions: in 2004 Kōfu reached a temperature of 40 °C (104 °F) previously almost unknown in Japan, and it has fallen below 0 °C (32 °F) as early as 26 October,[2] which is about a month before the earliest freezing temperatures in such coastal cities as Kanazawa or Tokyo.