Nagano (長野市, Nagano-shi), the capital city of Nagano Prefecture, is located in the northern part of the prefecture near the confluence of the Chikuma and the Sai rivers, on the main Japanese island of Honshū.

Nagano is most famous for Zenkō-ji, a 7th-century Buddhist temple that overlooks the city. A million tourists visit Nagano annually. Nagano was originally a town in Kamiminochi District built around the hilltop temple that is the largest wooden building in eastern Japan, but the city now encompasses locations that were within Sarashina, Hanishina, and Kamitakai districts. 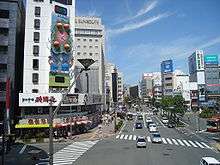 All but the city of Myōkō are within Nagano Prefecture.

The city is located within Minuchi (水内郡), Takai (高井), Sarashina (更級郡), and Hanishina (埴科郡) Districts in the ancient Shinano Province. Zenkō-ji relocated from the current city of Iida (642). Afterwards, the town of Monzen became one of the motel towns of Hokkoku Kaidō. The Battles of Kawanakajima were fought there including the fight between Takeda Shingen (武田信玄) and Uesugi Kenshin (上杉謙信). In 1742 (Inu-no-Mansui (戌の満水 or 千曲川大洪水), the water level reached 6.4 metres (21 ft)) at Akanuma (near the border with the former town of Toyono.) Due to Zenko-ji earthquake (May 8, 1847), nearly 10,000 people died. Nagano gained city status in 1897. The Matsushiro Underground Imperial Headquarters (松代大本営) was started in 1944, but was cancelled in 1945 due to the end of war. The city hosted the biggest mergers of the Showa Era I in 1954. In 1959, due to the flooding of Chikuma River, 71 people died or were missing and 20,000 homes were flooded. The biggest mergers of the Showa Era II occurred there in 1966. The Matsushiro Earthquake (松代群発地震) was here. Due to landslides (地附山地すべり災害) in 1985, 27 people died and 60 homes were destroyed or badly damaged. The city hosted the 1998 Winter Olympics and the Paralympics. In 1999, Nagano became a core city. Due to the mergers in the Heisei Era, the city absorbed the municipalities of Toyono, and the village of Togakushi, and Kinasa (from Kamiminochi District), and the village of Ōoka (from Sarashina District). Nagano hosted the 2005 Special Olympics World Winter Games.

On April 1, 1897, the city was founded. It became the first city founded in Nagano Prefecture and the 43rd city in Japan. On October 16, 1966, the current and the second city of Nagano was founded by merging with 8 municipalities, including the original city. On January 1, 2005, the city absorbed municipalities from Kamiminochi District (Toyono, Togakushi and Kinasa) and Sarashina District (Ooka). On January 1, 2010, Nagano absorbed the town of Shinshūshinmachi and the village of Nakajō from Kamiminochi District.[3]

Nagano has a humid subtropical climate (Köppen climate classification Cfa), bordering on humid continental (Köppen Dfa); its location in a sheltered inland valley means it receives less precipitation than any part of Japan except Hokkaidō. The city receives heavy winter snow totaling 2.57 metres (101 in) from December to March, but it is less gloomy during these cold months than the coast from Hagi to Wakkanai. 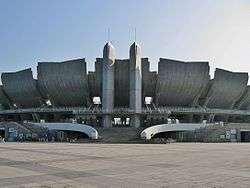 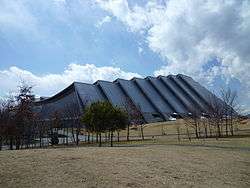 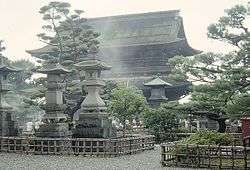 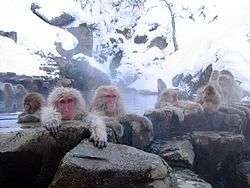 The historic site of the Battles of Kawanakajima was converted into parkland, with a municipal museum of the history of the Zenkoji plain.

Matsushiro, the former castle town of the Sanada clan, is located in the southern part of the city. The town retains an historic atmosphere, preserving many samurai residences, temples, and gardens of the feudal period, including the remains of the castle and mansion of feudal Lord Sanada Jumangoku.

North of the city is the village of Iizuna. A popular destination in both summer and winter, it includes a ski resort, campsite, onsen, 10 ponds and a mountain slide ride.

Northeast of the city is Japan's largest ski resort, Shiga Kogen,[6] with the nearby Jigokudani Monkey Park,[7] famous for the wild Japanese macaque often found bathing in its hot springs.

The Nagano Electric Railway also runs the Nagano Line to major sites around the city and its suburbs.

The city is connected by rail south to Matsumoto via the Shinonoi Line, which terminates at Shinonoi Station.

Buses for Kawanaka-jima Bus and the Nagano Dentetsu Bus Co. service the city, departing both Nagano Station and the Nagano Bus Terminal just west of the station.

The city has primary, middle and high schools, along with a technology college.

There is a local football club AC Nagano Parceiro in J3 League.