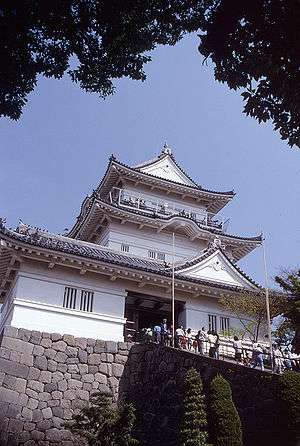 Odawara-juku in the 1830s, as depicted by Hiroshige in The Fifty-Three Stations of the Tōkaidō 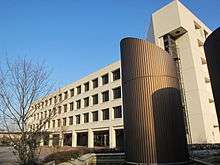 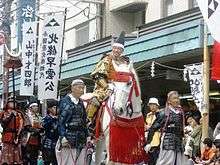 Odawara occupies the Ashigara Plains, in the far western portion of Kanagawa Prefecture. It is bordered by the Hakone Mountains to the north and west, the Sakawa River to the east and Sagami Bay of the Pacific Ocean to the south.

The area around present day Odawara has been settled since prehistoric times, and archaeological evidence indicates that the area had a high population density in the Jomon period. From the Ritsuryō system of the Nara period, the area became part of Ashigarashimo District of Sagami Province. It was divided into shōen during the Heian period, mostly controlled by the Hatano clan and its various branches. During the Gempei War between the Heike clan and Minamoto no Yoritomo, the Battle of Ishibashiyama was fought near present-day Odawara. During the Sengoku period, Odawara developed as a castle town and capital of the domains of the late Hōjō clan, which covered most of the Kantō region. The Hōjō were defeated by Toyotomi Hideyoshi in the Battle of Odawara in 1590, despite the impregnable reputation of Odawara Castle, and the territory came under the control of Tokugawa Ieyasu.

Under the Tokugawa shogunate, Odawara was the center of Odawara Domain, a feudal han ruled by a succession of daimyō. The castle town prospered as Odawara-juku, a post station on the Tōkaidō highway connecting Edo with Kyoto.

After the Meiji Restoration, Odawara Domain briefly became Odawara Prefecture, which was merged with the short-lived Ashigara Prefecture before joining Kanagawa Prefecture in 1876. During this period, the center of economic and political life in Kanagawa shifted to Yokohama, and Odawara suffered a strong decline in population, which was made more severe when the original route of the Tōkaidō Main Line bypassed the city in favor of the more northerly route via Gotemba.

The epicenter of the Great Kantō earthquake in 1923 was deep beneath Izu Ōshima Island in Sagami Bay. It devastated Tokyo, the port city of Yokohama, surrounding prefectures of Chiba, Kanagawa, and Shizuoka Prefectures, and caused widespread damage throughout the Kantō region. Ninety percent of the buildings in Odawara collapsed immediately, and fires burned the rubble along with anything else left standing.[1]

Odawara regained some measure of prosperity with the opening of the Tanna Tunnel in 1934, which brought the main routing of the Tōkaidō Main Line through the city. Odawara was raised from the status of town to city on December 20, 1940. On August 15, 1945, Odawara was the last city in Japan to be bombed by Allied aircraft during World War II. On November 1, 2000 Odawara exceeded 200,000 in population and was proclaimed a special ordinance city with increased autonomy from the central government.

Companies headquartered in Odawara include:

Besides Odawara Castle, Odawara is a major transit point for the Hakone hot springs resort area and the sightseeing locations of the Fuji-Hakone-Izu National Park. Within the city itself, the Yugawara area is also a well-known hot spring resort.

Enoura, a coastal area of Odawara known for its pristine sea, has an abundance of kumamomi, a type of fish which prefers clear and clean water. Sea turtles are also sometimes present there. Because of the clear water and plentiful undersea life, many people come to Enoura for scuba diving.